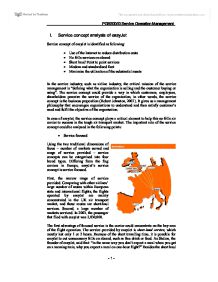 I. Service concept analysis of easyJet Service concept of easyJet is identified as following: * Use of the Internet to reduce distribution costs * No frills services on aboard * Short haul/ Point to point services * Modern and standardised fleet * Maximise the utilisation of the substantial assets In the service industry, such as airline industry, the critical mission of the service management is "defining what the organisation is selling and the customer buying or using". The service concept could provide a way in which customers, employees, shareholders perceive the service of the organisation, in other words, the service concept is the business proposition (Robert Johnston, 2001). It gives us a management philosophy that encourages organisations to understand and then satisfy customer's need and fulfil the objective of the organisation. In case of easyJet, the service concept plays a critical element to help this no-frills air carrier to success in the tough air transport market. The important role of the service concept could be analysed in the following points: * Service focused Using the two traditional dimensions of focus - number of markets served and range of service provided - service concepts can be categorised into four broad types. Differing from the flag carriers in Europe, easyJet's service concept is service focused. First, the narrow range of service provided. Comparing with other airlines' large number of routes within European state and international flights, the flights operated by easyJet are mainly concentrated in the UK air transport market, and those routes are short-haul services. Second, a large number of markets serviced. In 2003, the passenger that flied with easyJet was 2,030,000. The first advantage of focused service is the carrier could concentrate on the key area of the flight operation. The service provided by easyJet is short-haul service, which mostly last only 1 or 2 hours. Because of the short travelling time, it is possible for easyJet to cut unnecessary frills on aboard, such as free drink or food. ...read more.

"The Internet has peobably had a bigger effect on people's abiltity to fly than the jet engine. The jet engine was an improvement on the propeller, but what really made it a mass market for everybody was the ability to economically speaking let that seat go for �1. You can only do that with the Internet." (Simon Calder, 2003) easyJet could enjoy a low booking costs should thanks to the cost of "distribution" falls almost to zero. III. Service encounters of easyJet Basically, the service that passenger could experience are booking/ticketing, check-in, boarding, take-off, cabin service, catering, flight attendant service and arrival; however, there are many other activities that ensuring the smooth operation of the airline could not be saw by the passengers. According to Robert Johnston, there are mainly three kinds of service encounters: remote encounters, phone encounters and face-to-face encounters. Although remote encounter-on-line booking-is a major service encounter, for easyJet, the most critical encounter is the face-to-face encounter between the passengers and customer-facing employees. The passengers could neither see the busy pilots nor experience the hard work of maintenance on the round, what they can experience is very small art of total service delivery system, but none the less would judge the whole organisation on the basis of the small service encounter (Robert Johnston, 2001). Therefore the quality of face-to-face encounter is closely related to the survival of easyJet. Unfortunately, this critical service is not under control of easyJet totally. Besides the service concept, polite & professional staff which could be managed by the airline, there are a number f other factors will influence the service encounters, for instance, the customer's uncertainty, social interaction. * Psychological risk In case of eayJet, the first intensity of service encounter is the psychological risk entailed by the lack of confidence of this new concept of air service. We mentioned above that low-cost airline is a brand new business model introduced just couple years before. ...read more.

Easyjet's brand image is well known in the market place and the organisation is known to be a market leader. In European markets, being the UK, the Netherlands and Switzerland, esyJet has established a strong brand (Thomas C. Lawton, 2002). Well-developed strategy. World-class organisation has clear planes in place that set out how they will achieve their goals and their vision. The strategy of easyjet is not pit-in-the-sky but something concrete that employees feel is both achievable and desirable. The strategy communicates how this will be achieved and defined their part in the activities. Great service is delivered by employees who don't need to be defensive in their dealing with customers. easyjet favours an informal company culture with a very flat management structure, which eliminates unnecessary and wasteful layers of management. All office-based employees are encouraged to dress casually. Ties are banned-excepted for pilots! Remote working and "hot-desking" have been characteristics of easyjet since the beginning. A positive attitude is generated by easyJet culture consistent with the declared competitive strategy, and that values the contributions of all members. Supportive and committed staff. Excellent service is delivered either directly or indirectly by employees. easyJet uses approaches such as empowerment or self-directed work team appropriately rather than implement these ideas because hey've seen them work elsewhere. Staff is committed to the organisation an to the service concept because they are involved in the process of service development, they are encouraged to own the service delivery process, to look for ways of improving it, and they are motivated by the right mix of recognition and reward. Reference 1. Robert Johnston, (2001), Service Operation Management, Person education limited, UK 2. Thomas C. Lawton, (2002), Cleared for Take-Off, Ashgate Publishing Limited, England 3. Simon Calder, (2003), No Frills-The Truth Behind The Low-cost revolution In the Skies, Virgin Books Ltd, London Website: 1. The Secret Behind High Profits at Low-fare Airlines http://www.boeing.com/commercial/news/feature/profit.html 2. easyjet overview http://www.easyjet.com/en/about.html 3. The low costs concept http://www.easyjet.com/en/about/infopack_overview.html PGBS0050 Service Operation Management - 1 - ...read more.