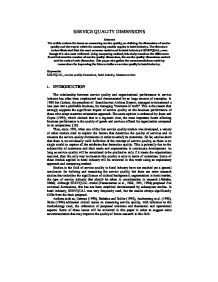 SERVICE QUALITY DIMENSIONS. The literature review illustrated that the most common model used in hotel industry is SERVQUAL, even though it is also most criticized. Using comparing method, this study examines the differences found between the number of s

SERVICE QUALITY DIMENSIONS Abstract The article reviews the issues on measuring service quality, on defining the dimensions of service quality and the way in which the measuring models applies to hotel industry. The literature review illustrated that the most common model used in hotel industry is SERVQUAL, even though it is also most criticized. Using comparing method, this study examines the differences found between the number of service quality dimensions, the service quality dimensions content and the rank of each dimension. This paper also gather the recommendations made by researchers for improving the future studies on service quality in hotel industry. Keywords: SERVQUAL, service quality dimensions, hotel industry, literature review 1. INTRODUCTION The relationship between service quality and organizational performance in service industry has often been emphasized and demonstrated by an large amount of examples. In 1980 Jan Carlson, the president of Scandinavian Airlines System, managed to turnaround a loss year into a profitable business, by managing "moments of truth". This is the reason that strongly supports the significant impact of service quality on the business performance of those who adopt customer orientation approach. The same opinion is embraced by Juran and Gryna (1993), which claimed that in a log-term view, the most important factor affecting business performance is the quality of goods and services offered by organization compared to its competitors. [10] Thus, since 1978, when one of the first service quality models was developed, a variety of other models tried to explain the factors that determine the quality of services and to measure the service quality dimensions in order to satisfy its customers. So far, studies show that there is no universally valid definition of the concept of service quality, as there is no single model to capture all the attributes that determine quality. This is primarily due to the subjectivity of customers and their needs and expectations in continuous development. ...read more.

[16] Researchers Martinez J.A. and Martinez L. (2010) made a critical study on the conceptualization and measurement of service quality, treating the most important service quality models in terms of types - reflective or formative. They classified the using this criteria and SERVQUAL model is framed in the category of formative multidimensional models. First weakness of these models is the fact that the service quality construct is formed by its dimension and this does not exist separatly from its dimensions. For this reason it all relevant dimensioins should be included in the model. Secondly, there is absolutly necesarry to distinguish the attribute-level performance from global judgements about the service as disparate entities, with divergent meaning, antecedents and consequences. [9] Likewise, Martinez and Martinez recommended to develope more creative models, multidimensional and hierarchical, based on phenomenological research, which consider existing processes depending on context. 6. CONCLUSIONS Literature clearly shows that there is still much work to be done in this area, that of measuring the quality services, considering that many of these conceptual models and their empirical testing leads to a limited way to use them in practice due to differences arising on the number of dimensions, their definition and importance. SERVQUAL model limitations refer specifically to the fact that this is not universally valid (Carman, 1990), dimensionality of the service quality may depend on the type of service studied (Babakus and Boller, 1992), involves a difficulty in analyzing the differences between expectations and perceptions (Asubonteng et al., 1996) and cultural background influence customer perceptions on service quality (Akbaba, 2006). However, in the hospitality industry, SERVQUAL is most often used for determining the level of service quality, whether it was applied as proposed by Parasuraman et al., whether it was applied with small changes in creating the items (LODGQUAL, HOLSERV) or was used only as a logical framework, applying different methodologies from those originally proposed. A significant recommendation in order to improve research in this area is that of methods using both qualitative and quantitative, using phenomenological techniques that lead to creative models in quality services. ...read more.