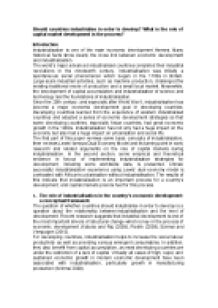 Should countries industrialise in order to develop? What is the role of capital market development in the process?