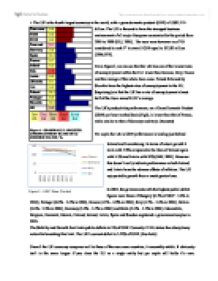 Should the UK join the Eurozone?

1. The UK is the fourth largest economy in the world, with a gross domestic product (GDP) of US$2,133 Euro-zone 8.8 EU25 8.8 EU15 8.0 Denmark 5.1 Germany 9.6 Spain 10.3 France 9.7 Ireland 4.3 Italy 7.8 Latvia 9.6 Lithuania 9.1 Lux. 4.4 Poland 18.2 Portugal 6.9 Slovakia 16.5 UK 4.6 Jan 05 Dec 04 Nov 04 Sept 04 June 04 Figure 1 - SEASONALLY ADJUSTED UNEMPLOYMENT RATES IN EU MEMBER STATES : % billion. The UK is forecast to have the strongest business environment of all major European economies for the period from 2005 to 2009 (EIU, 2005). The euro-zone however as of '05 considered to rank 1st in overall GDP equal to $12.82 trillion (2006,PPP). From Figure1, we can see that the UK has one of the lowest rates of unemployment within the EU: lower than German, Italy, France and the average of the whole Euro-zone. Poland followed by Slovakia have the highest rates of unemployment in the EU. Surprisingly in fact the UK has a rate of unemployment almost half of the Euro-zones/EU25's average. The UK's productivity performance, on a Gross Domestic Product (GDP) per hour worked basis (Fig2), is lower than that of France, while similar to that of Germany and Italy. (Eurostat) Per capita the UK is GDP performance is leading just behind Ireland and Luxembourg. In terms of actual growth it trails with 1.9% compared to the likes of Ireland again with 5.5% and Latvia with 10% (IMF, 2005). However this doesn't really indicate performance as both Ireland and Latvia have the adverse effects of inflation. The UK enjoys stable growth from a much greater base. ...read more.

As I afore stated firms will be encouraged to locate in one place, in a way, the "Euro CBD." One could consider the adverse regional multiplier effect- firms would be attracted away from the edges of the UK to the south or even France or Germany, a more central position within the EU. In a perfect situation, this would not be a cause for concern as these edge-pockets of skilled labour and relatively lower costs should attract firms. However it is more likely that the skilled work force will have migrated elsewhere and the areas will be left even more depressed. Furthermore, one argument for the EU is the right of labour mobility, the extent of this is out of proportion if one is to consider the language barrier only then it is apparent that this is not beneficial for the British people. The British workforce is fairly immobile as it is just across the UK. The UK differs very much from the rest of the EU, as was apparent in HM Treasury's, so far, 18 reports- each shows how different our business cycles are from the EU and more in line with that of the US. Not only is the lack of convergence an issue the lack flexibility to cope with economic change would be likely to destabilise the UK economy (Spencer, 1985). More UK borrowing (corporate and consumer) is undertaken in the short-run, variable interest rate terms than in the EU; in fact UK consumers borrow more than most eurozone countries, which funds the housing market. The housing market far more significant in the UK (greater proportion of owner-occupiers) - changes in interest rates therefore would affect the UK more. ...read more.

The 'social dimension' of the EU, including the working time directive imposed for 'health and safety' reasons under the single market laws, would be abrogated in the UK. Finally, EU law would no longer be binding on the UK. Instead, only those agreements explicitly made with the EU would be, as any Treaty obligation, incorporated into UK law. The UK must protect itself against this situation as it threatens immense economic costs to the UK. Plainly at the very least the UK must resist new incursions into its economic policies - notably the draft Constitution, the euro, new efforts at harmonisation and any demands for bail-out. However this essentially defensive posture would still leave the UK not only paying large existing costs but also vulnerable to opportunistic ambushes establishing elements of the above. Hence it is inadequate to safeguard the UK's interests. Our suggestion therefore is that of a 'UK protocol' under which the UK would withdraw from elements of these EU policies - essentially to unilateral free trade while maintaining the underlying freedoms of movement of labour and capital of the EU and also aspects of the single market, notably in services as they come to be deregulated over time. It is hard to judge in the end whether other EU members would go along with this. Should there be no willingness to do so, then it would be in the UK's interests to leave the EU and unilaterally pursue liberal policies, including towards members of the EU. We have shown in these pages that on the assumption that the EU would impose on the UK all the external barriers it now levies on other non-members the UK would be considerably better-off by following this course. ...read more.