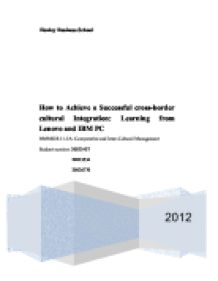 Henley Business School How to achieve a successful cross-border cultural integration: Learning from Lenovo and IBM PC Introduction Cross-border acquisition is a popular choice for organisations to achieve competitive advantages and access new markets in the world. In 2004, Lenovo acquired IBM's personal computer (IBM PC) sectors in order to grow and prosper. As Lenovo is a localised Chinese company, the acquisition is called 'a snake swallowed an elephant' and viewed cynically by many researchers (Peng, 2008). However, Lenovo has achieved successful cross-border acquisition because Lenovo is one of top players in international computer market now with increasing profit (Peng, 2008). During the post-acquisition period from 2004 to 2008, Lenovo's business performance improved a lot, for instance the revenue and profit showed an dramatically increased tendency (Appendix 1). Since many failures of cross-border acquisition assigns blame to the cultural differences, or precisely, cultural integration, this essay seeks to explain how the successful cross-border cultural integration was achieved in the case of Lenovo and IBM PC. In this essay, both of national cultural and organisational cultural distance would be explored through the comparison and analysis of national culture between Lenovo and IBM PC. It will focus on the challenges of culture distance posed on Lenovo's cross-border acquisition. Some other acculturative factors also will be discussed in order to analyse the cultural integration strategy of Lenovo. All of data about Lenovo's cultural integration are collected from secondary research. Background of Cross-border Acquisition > Differences of National Cultures between China and America Hofstede's cultural framework involves five culture dimensions, including individualism/collectivism, power distance, uncertainty avoidance and masculinity/ femininity (Hofstede, 1991). As the following graph shows that both of the index of power distance (PDI) and long-term orientation (LTO) are significant higher in China than those in the USA; America is higher than China in the aspect of individualism (IDV); only the levels of Masculinity (MAS) and Uncertainty Avoidance (UAI) ...read more.

Meanwhile, the difference in organizational culture is the main reason for the integration conflicts as well (Sarala, 2010). Problems would be occurred because two different companies have difficulty in understanding each other in term of organisation culture and affect the efficiency of integration, and hence pose a drag on the success of cross-border acquisition (Nahavandi and Malekzadeh, 1988). David and Singh (1993) showed the similar view that culture ambiguity would be caused by imperfect understanding of organisational culture in both acquiring and acquired companies. Even though the predominant culture is distinct, most of organisational members cannot make sure they are able to adapt the new one, so the conflicts would be likely increased after acquisition (Datta, 1991). Stanwick (2000) states that the cohesion between the sectors in the acquisition will be undermined if the acquirer force the acquired company accept its culture, and therefore the synergy would not be realised. Therefore, underestimating the importance of organisational cultural integration would result in fail cross-border acquisition (Schraeder & Self, 2003). Since the impact of cultural differences on cross-border acquisition is significant as discussed above, as a whole, understanding the cultural differences between the sectors in the cross-border acquisition is useful to choose an appropriate cultural integration approach. Acculturation Factors on Cultural Integration in Lenovo Although there is a tendency that the acquisition researches from the cultural perspective concentrate on the impact of cultural differences, some additional acculturation factors derived from the theory of acculturation should also be taken into account since these factors have revealed their significant influence in cultural integration (Sarala, 2010; Nahavandi & Malekzadeh, 1988). Acculturation can be identified as a process of cultural changes that occur when different cultural entities contacts with each other (Berry, 1980, cited in Sarala, 2010). According to Winthrop (1991, cited in Hewege, 2011), the acculturation theory originates from the study in relation to cultural adaptation in the context of immigration. ...read more.

Lenovo's current success also proves that its strategy of cultural integration is successful. Conclusion Based on the above comparison and analysis regarding to the national culture between China and America, the organizational culture between Lenovo and IBM PC and the impact of acculturation factors after acquisition, there are some similarities between Lenovo and IBM-PC; however, the cultural distance between them is still relatively great in both of national culture and organisational one, such as the definitely different attitudes in power distance and management styles. Numerous scholars have shown their opinions that the culture differences will negatively affect the achievement of maximising the effective synergy in cross-border acquisition. However, Lenovo do not come across serious problems in this acquisition according to Peng's research. This research found that Lenovo had taken a series of effective measures to reduce the negative influence of cultural differences in its post-acquisition under the pressure of achieving sustainable development through opening up international market, for instance, the maintenance of the remuneration system and the separate management mode used by IBM to increase its attractiveness to IBM PC members, and the establishment of cultural integration committee also improve the communication between the two groups and the harmonious working environment. The limitation of the research in this essay is that our data is secondary information and thus our discussion is limited. Appendix 1 Financial performance is a significant indicator in evaluating a company's operation performance. In the post-acquisition period from 2004 to 2008, Lenovo's financial performance improved to a large extent. The following chart illustrates the change trend of some financial indicators including revenue and profit based on the financial statement during those periods. Source from Lenovo (2012) As the above chart showed, both of revenue and profit are increased dramatically in these 5 years. The sales increased by almost 6 times in 2008 in comparison with that in 2004. As for the profit, it grows to $465,237,000 in 2008 from $130,128,000 in 2004. Therefore, Lenovo's acquisition is successful in the aspect of financial performance. ...read more.