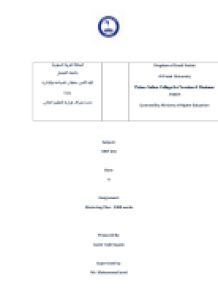 ï»¿Ø§ÙÙÙÙÙØ© Ø§ÙØ¹Ø±Ø¨ÙØ© Ø§ÙØ³Ø¹ÙØ¯ÙØ© Ø¬Ø§ÙØ¹Ø© Ø§ÙÙÙØµÙ ÙÙÙØ© Ø§ÙØ£ÙÙØ± Ø³ÙØ·Ø§Ù ÙÙØ³ÙØ§Ø­Ø© ÙØ§ÙØ¥Ø¯Ø§Ø±Ø© Ø¨Ø¬Ø¯Ø© ØªØ­Øª Ø¥Ø´Ø±Ø§Ù ÙØ²Ø§Ø±Ø© Ø§ÙØªØ¹ÙÙÙ Ø§ÙØ¹Ø§ÙÙ Kingdom of Saudi Arabia Al-Faisal University Prince Sultan College for Tourism & Business Jeddah Licensed By: Ministry of Higher Education Subject: MKT 211 Class: A Assignment: Marketing Plan - 1500 words Prepared By: Jaabir Aadil Jappie Supervised by: Mr. Mohammed Jamil Major Assignment Length: 1500 words References: at least you have to use 5 references. Each group contains of 3 students. Outline Due Date: 10/11/2012 Final draft due date: 15/12/2012 Find an existing or potential product and prepare a marketing plan. You marketing plan must follow the headings and sub-headings below; if needed, you can add some more. Before start working on your paper, please provide the instructor with an outline to gain the approval. Please refer to the report structure file. Marketing plan should contain the following I. EXECUTIVE SUMMARY The Executive Summary, one of the most frequently read components of a marketing plan, is a synopsis of the marketing plan. Although it does not provide detailed information, it does present an overview of the plan so readers can identify key issues pertaining to their roles in the planning and implementation processes. Although this is the first section in a marketing plan, it is usually written last. II. ENVIRONMENTAL ANALYSIS The Environmental Analysis presents information regarding the organization’s current situation with respect to the marketing environment, the current target market(s), and the firm’s current marketing objectives and performance. The Marketing Environment This section of the environmental analysis considers relevant external environmental forces such as competitive, economic, political, legal and regulatory, technological, and cultural forces. - Competitive forces - Economic forces. - Political forces - Legal and regulatory forces - Technological forces - cultural forces III. SWOT ANALYSIS a. Strengths b. Weaknesses c. Opportunities d. Threats IV. MARKETING OBJECTIVES The development of marketing objectives is based on environmental analysis, SWOT analysis, the firm’s overall corporate objectives, and the organization’s resources. ...read more.

Also a series of mobilephone accessories have been produced by Sony so that customer can spruce uptheir mobile phone?s appearance, prevent them from damage, or enhance their usage.Among the subcategories are:i.Phonesii.Phone Accessories. K. In-Car Entertainment Different in-car entertainment products have been produced by Sony.Apart from the normal car radio and CD changer devices, Sony has producedmore entertaining devices to view different media like video and television.Among the products subcategorized in this category are as follows:i.Xplod CD receiver ii.Xplod in car visualiii.Xplod Cassette receiver iv.Xplod Amplifier v.Xplod Speaker/Subwoofer L. Storage and Recording Media Sony has developed a range of reliable storage and recording media thatcustomers can depend on for recording, transferring or storing their information.These products ranges from those devices which can be used to store smallamount of data for transfer and those media to store a large amount of datapermanently.The sub- categories of these products include:i.Memory Stickii.USB storage mediaiii.Data storage mediaiv.Video Storage mediav.Audio mediavi.Storage mediavii.Professional media M. Battery and Charger Sony has a range of batteries that are long-lasting and offer maximum power for optimum performance, making sure that the customer will never be lefthanging during the most crucial time. SONY Promotion Brief Introduction: Promotion is a key element of marketing program and is concerned witheffectively and efficiently communicating the decisions of marketing strategy, tofavorably influence target customers? perceptions to facilitate exchange betweenthe marketer and the customer that may satisfy the objective of both customer and the company.A company?s promotional efforts are the only controllable means to createawareness among publics about itself, the products and services it offers , their features and influence their attitudes favorably. Sony Marketing Communication Mix: Sony India will spend Rs 200 crore in this financial year on advertising andpromotion (Promotional Budget) of the entire range of consumer electronics, outof which Rs 60 crore will be spent only on digital imaging products. The major elements of promotion mix include advertising, personal selling,sales promotion, direct marketing, and publicity. ...read more.

The laptop is fitted with hybrid hard disk drive and motion eye cameraand Bluetooth compatible headset with applications for increasing mobility andvideo conferencing. It?s price is about Rs. 1,24,000. Discussion On The CurrentMarketing Mix In my opinion, I think the current marketing mix which Sony Corporation hasis satisfactory to customer needs. As it can be Cleary seen that Sony as acompany has expanded its products and services from electronic and digitaldevices to television broadcasting(i.e. Sony home entertainment) andentertainments like music (i.e. Sony BMG music entertainment) and movieproduction and distribution (i.e. Sony Picture).In providing a wide range of products and services with high quality, Sonyhas by far influenced most of the its customers perception favorably towards itsproducts. From time the company was created till now, the quality of theproducts that Sony offers is improving each year, although there are someoccurrence of defects like that of defect on laptop batteries which were sold andgot exploded and caught fire in Japan has caused the company a great loss as ithad to recall a million of those defected batters, and also this issue degraded thecompany?s reputation. But the overall products offered by Sony to my opinion willstill be of best quality.Even though the prices imposed by Sony seems to be fair withconsideration of the quality of the products and services offered , The onlyproblem is that, Sony has priced its products too expensively for a middle or lower class customer to afford to buy those products. Apart from that Sony hastargeted its market mainly to urban customers as are the only customers whocan afford such expensive products. In my opinion, I think Sony has to createalso some of low end products with low prices which can be affordable to lowincome users.As I have mentioned above, In the case of place (distribution), Sony hastargeted its markets in the urban areas, in big cities like New Delhi, Pune,Mumbai etc. In most of all this places, Sony has more than four differentdistributors like Sony world and also they have Sony service centers. So, For thecustomers in urban areas the supply seem to be satisfactory, though the ruralareas are left out. ...read more.