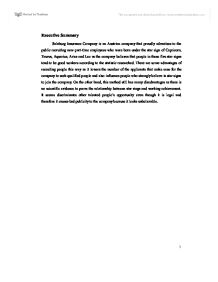 Executive Summary Salzburg Insurance Company is an Austrian company that proudly advertises to the public recruiting new part-time employees who were born under the star sign of Capricorn, Taurus, Aquarius, Aries and Leo as the company believes that people in these five star signs tend to be good workers according to the statistic researched. There are some advantages of recruiting people this way as it lowers the number of the applicants that make ease for the company to seek qualified people and also influence people who strongly believe in star signs to join the company. On the other hand, this method still has many disadvantages as there is no scientific evidence to prove the relationship between star sings and working achievement. It seems discriminates other talented people's opportunity even though it is legal and therefore it causes bad publicity to the company because it looks unbelievable. Introduction In these days, there are a lot of processes for the firm to recruit suitable people to be their employees. Schermerhorn (2004) states that there are three steps of recruiting new employee: advertise of the job position vacancy, preparatory contract with the suitable capability candidates, and finally screening to settle a group of qualified applicants. Commonly, for seeking the new employees, the company needs to consider the candidates' application forms including age, sex, field of study, physical and mental capability, criminal conviction, previous employment, testing employees, and interview, (Raymond 2006). ...read more.

If the company wants new employees in the five star signs, it would make some of them in the five star signs more confident to join the company. People who are strongly believer in star signs can be brilliant and creative that can make good progress to the company as their working inspiration are given by the company. Disadvantages of Salzburg approach There is no scientific evidence that high achievement has anything to do with star signs, hence this approach could hurt the company performance in the long run. <http://dit.dru.ac.th/home/023/psychology/chap6.html> states the general characteristics of a person to be considered suitable for the job position in the company as right capabilities and personalities. The right capabilities are classified into education, experience, and skills. Education is considered from the field and level of study to be consistent with the work. If the field of study is not directly match the work requirement, at least it should be nearby. Sometimes if a person did not study in the related field but he had worked in this field for a long time then he can still be considered. Working experience is another key issue. If the recruited person is experienced, he would not need much time to study his new work. However, although a new employee has no working experience, he may have a good ability to learn new things quickly. ...read more.

(1999) states that training can be separated into two types: initial or short term training and continuing or long term training. Initial training is for new employees of the company who are not experienced in understanding the company instructions, policies, and scopes of work to be ready to work. Continuing training has many objectives including review of the previous session in company's policies, goals, and conditions. Also, to make understanding in the change of the company such as new policies and what is happening in the market recently. This training gives more knowledge and skills to the employees via lecture, demonstration, group discussion, workshop, case study, and other activities to make them work more actively and effectively in order to improve customers' satisfaction. Finally, the company should not advertise on star signs because it is too specific. This advertisement can be blamed because it seems to discriminate the work opportunity of people who have proper capability and personality for the work but were not born under the requested star signs. The company can still seek new employee persisting in this method but they should accept every candidate's applications and sort out whose star sign does not match the requirements after that without letting them know in order to maintain the company's reputation as an insurance company. ...read more.