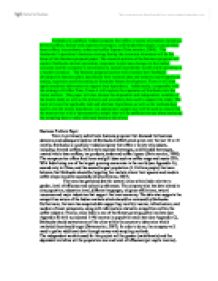 Strategic Decision The global market research team recommends expanding Starbucks' operations into the following regions of India: � New Delhi (multiple retail locations) � Mumbai (Bombay - multiple retail locations) � Lucknow � Chandigarh The comprehensive statistical analysis package completed on behalf of the global market research team supports expansion into specific target areas while indicating that other cities within India may not prove to be viable expansion candidates. Evaluating a limited set of data always presents the risk of poor business decisions based upon faulty assumptions. Statistical testing cannot prove the viability of Starbucks' alternate hypothesis so company executives must weigh the test results using the wealth of professional experience possessed by the Starbucks' organization. Conclusion When faced with challenging business decision one should conduct as much research as possible to aide in the decision making process. "There are three components to any decision: (1) the choices available, or alternatives; (2) the states of nature, which are not under the control of the decision maker; and (3) the payoffs. Statistical decision theory is concerned with determining which decision, from a set of possible alternatives, is optimal for a particular set of conditions" (Lind et al, 2005, pp. 688 - 689). The CoffeeTime scenario was an excellent example of how to use statistics to help make viable business decisions that provide plausible short and long-term solutions that will support overall growth projections that will meet or exceed the company's financial goals. Developing a good research design is very important and having the ability to use secondary research to target resources and develop primary research is also an extremely valuable tool. In research, the limitations and boundaries that one must consider are varied, such as validity of data, sample size and budget constraints. However, the goal remains the same, which is to minimize the risk in order to maximize the rewards. When making any business decision, conducting research provides the overall business with quantitative and qualitative statistical data which can help a business achieve their overall goals and objectives through the gathering, review, analysis and presentation of valid, reliable and accurate data. ...read more.