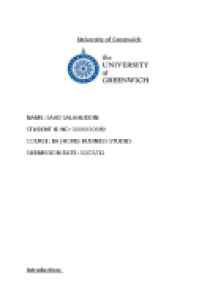 ﻿University of Greenwich NAME: SAAD SALAHUDDIN STUDENT ID NO: 0006930689 COURSE: BA (HONS) BUSINESS STUDIES SUBMISSION DATE: 30/03/12 Introduction: The Starbucks Corporation was born in Seattle in the early 70s and has blossomed into the largest selling specialty coffee retailer in the world. It has stores in many countries worldwide, including many domestically, and has competitors in two markets. The first being the Tea and Coffee Manufacturers (Non-Alcoholic Beverages) industry and the second is restaurants. Starbucks is the largest coffeehouse company in the world, with 17,133 stores in 49 countries, including 11,068 in the United States, nearly 1,000 in Canada and more than 800 in Japan. The outcome of the report will come after an in-depth analysis of Starbucks external environment has been done, where the pestle analysis and porter`s five forces will be discussed to identify the current opportunities and threats that exist in each of the industries. With the use of several conceptual tools, such as the VRIO, Value Chain framework, SWOT, and BCG Matrix Starbucks internal capabilities will then be examined to discover how well it is performing. The current issues and challenges faced by Starbucks to remain competitive in each sector will then be discussed by doing each of the calculations of the financial ratios to see how well they are performing in their business. After completion of the external and internal analysis it will be possible to draw up several strategic options open to Starbucks. Using the TOWS, ANS OFF, and BCG MATRIX evaluation tool developed by Johnson et al each of the strategic options will be ranked on their suitability, acceptability and feasibility. After evaluating each option the most appropriate will then be chosen and discussed in finer detail by using Bowman`s Strategy Clock, and then finally, a conclusion will provide a logical summary to the report and provide information on whether the recommend strategy is sustainable. ...read more.

By new entrants coming in and competitors like Mc Donalds who entitles to give the finest roast coffee of sensible class for lower price, buyers now can influence to bargain more compared to the bargaining power they had before. PART 2: Internal Analysis: Value chain: The value chain analysis of Starbucks is: Inbound Logistics: To build relationship with the farmers and wholesalers, Starbucks agent went to countries where they are growing coffees. To get the green coffee beans, it had to be dealt with the farmers. It obtained high price as to make sure that the poor people have sufficient money to protect the cost of the production and also for their families. Starbucks maintained fixed price to obtaining the prices of the coffee beans in the coming time. Operations: As they were very well known company with reputation that is why they were able to increase their market through distribution channels. To overlook the problems, Starbucks searched for partners who had solid restaurant experience, strong financial resources, had values and a culture where they trade with Starbucks were they were loyal with customers. Marketing and Sales: Through marketing consumers knows the Starbucks coffee and buys it. Marketing will not be required as Starbucks is known in the entire world as majority of the people knows the name and the image of the brand with great value of the products. Service: This is very important part for Starbucks as this retains the value of the product i.e. fixing, renovating, and preparing. This area needs to be taken into consideration with the members of staff as they treat with customers, it emphasises on the need to confirm the experience of the customers that they had pleasure enjoying the atmosphere and the excellence of the product. Procurement: Procurement of Starbucks is the process of gaining the first class coffee beans from suppliers, so that they can use it in their coffees. ...read more.

1. When converting the low cost to the customers, the competitors will have to decrease their restrictions and earn even less profit then they were earning. 1. In conclusion the net profits should rise in the near future. Starbucks has the strategic capabilities to supervise use those capabilities or tools. It will need a large strength and will need a large number of economic powers. Moving the previous differentiation strategy a bit will make the company more updated which will permit to be flexible in the future as it had already is nonstop gaining advantages from the competitors even more vigorous and hard to copy. PART 7: CONCLUSION: Having analysed Starbucks internal and external environment and assessed several strategic options it is possible to suggest there are several ways Starbucks can continue its success despite the many threats and weaknesses that surround it. It is of fundamental importance that if Starbucks wants to remain competitive in all of its industries that it becomes more streamlined and lowers costs in order to meet consumer need for lower priced technology. If Starbucks can implement the strategic options recommended it is clear the company will be in a powerful position in all of its industries. This coupled with the unique resources and capabilities Starbucks has will further make its core competences and competitive advantages difficult to copy. Starbucks will have a sustainable competitive advantage over rivals. Starbucks has been increasing its debt every year, and at a pace that is faster than their assets are growing (which is clearly unhealthy). This is why we chose for the firm to slow down its expansion and to focus more on marketing their products. In such a saturated market as the one that they are in Starbucks needs to focus on increasing consumer awareness and to decrease debt as much as possible. In closing we believe that Starbucks can become even more profitable if they slow down their expansion and concentrate on the stores that they already have open. ...read more.