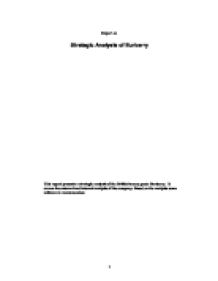 Report on Strategic Analysis of Burberry This report presents a strategic analysis of the British luxury goods Burberry. It covers the external and internal analysis of the company. Based on the analysis some actions are recommended. Abstract 3 1. Introduction: 4 2. Background 5 2.1. Company history 5 3. Report aim and objectives 6 4. Strategic Analysis 6 4.1. Marketing 21 4.2. A New Target Market Error! Bookmark not defined. 4.3. Problems facing Burberry 24 4.4. The Changing Environment 25 5. Conclusions: 27 References: 27 Abstract As the environment is in constant change, organisations need to change to cope with the new environment to maximise their profit. The best way of achieving that is through making a plan which starts with a strategic analysis. This report provides information about the strategic analysis in the British luxury goods maker Burberry. The analysis will cover two types of factors which are important for choosing a good business strategy. They are external factors such as political, social, economic and technological factors and internal factors which relate to the company. They are such as primary activities and support activities. The report concluded that Burberry has made big improvements in coping in the new environment through the use of its competitive advantage. However, it needs to do more to be in line with its competitors. Report on Strategic Analysis of Burberry 1. Introduction: In today's incredibly complicated world, organisations face enormous challenges. Customers demand more. Purchase decisions are made instantly. New technologies are emerging every day. Increase of globalisation. Markets are much more competitive than ever. Products are easily imitated and sold cheaply. Product life cycle is reduced. Internet became the centre of shopping behaviour (Fisk 2006). In order for organisations to succeed in such changing environments, they must have a strategy to give the organisations directions, choices and differentiation (Fisk 2006). For this strategy to function, it has to be managed. ...read more.

Burberry over relies on a small number of supplier for certain products. In order to have more bargaining power, it tries to search for other alternatives. d. the threat of new entrants New entrants in the clothing industry can raise the level of competition and in this way it reduces its attractiveness. The threat of new entrants largely depends on the barriers facing the industry. In some industry it is hard but in others such as clothing and restaurants is easy. Nguyen (n.a) states that apparel and footwear industry is very competitive because of the low barriers of entry. It is fairly easy for clothing companies to enter the industry but most companies find it hard to stay alive and continue because this industry tend to have shorter cycles, price deflation, outsourcing and following demographics. Therefore, it can be said that Burberry is facing threats from new entries such as counterfeits which is spreading in many parts of the world. There are emerging markets in Eastern Europe and the former Soviet Union. In the past such markets were controlled but not they all became free markets and they are considered to be large producers and consumers of fakes (Vithlani (1998:27). Counterfeits of luxury products are also found in East Asia including China. As they are exporting genuine luxury goods they are also exporting counterfeits. e. the threat of substitutes The presence of substitute products can lower industry attractiveness and profitability because they limit price levels. The threat of substitute products depends on buyer's willingness to substitute. In the current situation of high inflation it seems that consumers are willing to buy products which are cheap. Nowadays as the demand for luxury goods is increasing, the availability of counterfeit products is increasing. In a recent research on this matter it was found that counterfeit goods are popular among low income shoppers as well as wealthy British consumers. ...read more.

Diversification, on the other hand, involves moving into new products and new markets at the same time. This may involve a complete shift away from core activities into some other form of related activity. It represents a step into less familiar, perhaps even unfamiliar territory. Burberry had made use of these strategies. It used market penetration by strengthening the value of products through good advertising campaigns. It also used market development by selling its existing products into new markets such as China. It used product development by introducing new products into the existing market such as perfume, handbags and watches. Burberry used also diversification through the use of on-line business to support and enhance its traditional business. So it is used for: 1. ordering products from home 2. communication tool to promote their business 3. keeping track of their business status. Recently the factory of Burberry in Wales was closed with the future plan of moving production to China (Marketing Week 2007). The move to China is for economic reasons. This move is controversial. Some argue that Burberry has the right to be concerned about its situation. It is dead in the domestic luxury market in the UK. This is mainly caused by the football hooligans, Kate Moss facing drug-taking allegations and the spread of fake merchandise. Manufacturing Burberry goods in China has a good advantage. In the first place the cost will be low. A polo shirt costs �12 in the UK but �4 in the Far East (The Independent 2007). Secondly, the reputation of Burberry brand in China is very strong especially among the young consumers who search for British haute couture. Therefore, it seems that creating a market overseas is a sensible decision. However, others do not welcome this move. Many celebrities including Prince Charles, opposed to this move and believe that this move would destroy the pure British products. But according to the Independent (2007) many companies in Wales are closing down mainly for economic reasons. 6. Conclusions: 7. ...read more.