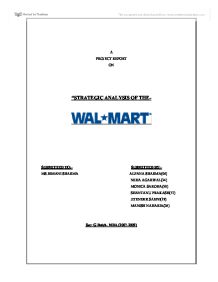 A PROJECT REPORT ON "STRATEGIC ANALYSIS OF THE- SUBMITTED TO:- SUBMITTED BY:- MS.HIMANI SHARMA ALPANA SHARMA(04) NEHA AGARWAL(34) MONICA SAROHA(30) SHANTANU PRAKASH(57) JITENDER SAHNI(19) MANISH NAHARIA(26) Sec: G Batch- MBA (2007-2009) ACKNOWLEDGEMENT The project "strategic analysis of WAL-MART", has been undertaken, in partial fulfillment of the requirements of Master in Business Administration (MBA) offered by Amity Business School, Noida. We take this opportunity to thank Dr.HIMANI SHARMA, for providing us an opportunity to take this project work and providing guidance during the project. And, above all we would like to thank the entire person who were closely associated with the project right from the beginning and under whose supervision and guidance whole of the project has been completed. Our sincere thanks also goes to those senior students who guided us in our work, who selflessly revealed several information, without which we would not have been able to unravel several ideas, which is now part of this report. CONTENTS * GLOBALISATION AND RETAILING * ABOUT WAL-MART * WAL-MART GOING GLOBAL * BUSINESS STRATEGY FOR WAL-MART * ENVIORNMENTAL STUDY FOR WAL-MART * WAL-MART ANALYSIS-INTERNAL * BCG MATRIX FOR WAL-MART * P.E.S.T. ANALYSIS FOR WAL-MART * PORTER'S FIVE FORCES ANALYSIS FOR WAL-MART * S.W.O.T. ANALYSIS FOR WAL-MART * VALUE CHAIN ANALYSIS * STRATEGIC ANALYSIS FOR WAL-MART * COMPETITIVE ADVANTAGE FOR WAL-MART * CORE COMPETENCIES FOR WAL-MART * DISTRIBUTION AND INTEGRATION FOR WAL-MART * WAL-MART RECENT DEVELOPMENT * EXPANSION STRATEGIES IN INDIA. GLOBALISATION AND RETAILING ............................Beginning of a new era INTRODUCTION We are living in a "Global village" today. Globalization is affected by several factors, including low growth in domestic markets, information technology, global consumer and shopping patterns, and the opening up of new Markets. Retail being an integral part of business world cannot remain untouched by all these things. However it is not easy for retailers to become global. Performance in foreign markets depends on careful adaptation of the home formula, since there are still regional differences and mostly local sourcing. ...read more.

The economic conditions are favorable for operation of private firms. In fact big retail chains like Wal-mart has revolutionized the US economy " Always Low Prices- ALWAYS ".With trends of globalization Wal-mart is able to spread it's wings in Asia-Pacific region where the economy is liberalized . Globalization, Liberalization and Privatisation gives economic policy that are is consonance with growth and expansion strategies of Wal-mart. Internal Environment Being the largest non-government employer and corporation in the world, Wal-Mart is bound to have an interesting internal structure put in place. So what exactly is the method to all the madness? Let's look inside Wal-Mart's Internal Environment. Corporate Structure Wal-Mart is a public corporation, however the majority of the stock is still held by Walton family members. Therefore, there is lots of family involvement at the top level. The headquarters are in Bentonville, Arkansas, along with the control and decision making ability of the organization. There is a very hierarchical structure in place which only fuels the "good old boys club" for top management. The other unique element in Wal-Mart's corporate structure is a strong culture that is fueled by the Wal-Mart way of doing things, which as far as they are concerned is the only way. WAL-MART ANALYSIS INTERNAL ANALYSIS - ANALYZING RESOURCES Financial Resources Wal-Mart is the world's largest and most profitable retailer. Wal-Mart's pre tax return on sales was 8% during 1989 which was double the industry standard and it continues to be the front runner till today. Wal-Mart commands market value 10 times more than its book value. * Wal mart stores FISCAL YEAR SEGMENT NET SALES SEGMENT OPEARTION INCOME 2007 7.8% $17029 2006 9.4% $15324 2005 10.1% $14163 * Sam's Club FISCAL YEAR SEGMENT NET SALES SEGMENT OPEARTION INCOME 2007 4.5% $1512 2006 7.29% $1385 2005 7.59% $1280 * International FISCAL YEAR SEGMENT NET SALES SEGMENT OPEARTION INCOME 2007 30.2% $4259 2006 12.7% $3509 2005 19.3% $3197 Human Resources Wal-Mart promotes internal staff development and over 60% of its store managers are promoted internally then direct recruits. ...read more.

The main reason for sourcing externally is for cost advantage. Although Wal-Mart doesn't manufacture the products it retails, it retails its store branded products which are sourced from private label manufactures. Most dry groceries and clothing apart from hand made products are sourced from Asian countries. As a case in point, Wal-Mart sources goods from China for more than 20 years with growth every year. During the last fiscal year, Wal-Mart sourced about $10 billion in Chinese made merchandise, directly from manufacturers in China and from other suppliers that source their goods from China (World Bank, 2002). Although the transport costs are usually marginally high, Wal-Mart undertakes its own distribution and warehousing activities with its strong fleet of 2000 plus high end trucks which have a turnaround in cycle time better than within the industry. The complexities of the global value change differ from the traditional value chain. Co-ordination Co-ordination involves sharing information, allocating responsibility and aligning efforts. Wal-Mart couldn't have been more successful if it didn't fulfill this. Wal-Mart realized in its early years, the ultimate source of its competitive advantage of cost can only be supplemented and supported by the effective co-ordination of its value chain activities. Technological advances were done light years ahead of its time. Unattributable sources, part of the industries talk is, Wal-Mart has more technology capabilities in its head-office than NASA. Wal-Mart has linked all its stores globally with VSAT technology which relays sales and product and any other information tracked by its systems to its head-office. This helps it source the right product at the right time to the right place helping minimize excess inventory apart from having the most ideal scenario of real time information. Sounds more like Sci-fi but Wal-Mart has state of the art technologies in place supporting the co-ordination of its activities. Pressures for Co-ordination and Integration Pressures for co-ordination and integration are need for cost reduction and real time information apart from the need for optimum responsiveness to changes in the market, globally. Presence of multinational competitors is also key. ...read more.