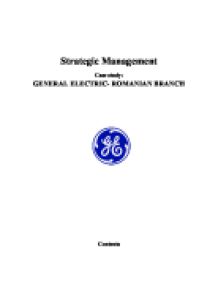 Strategic Management Case study: GENERAL ELECTRIC- ROMANIAN BRANCH Contents 1. Introduction a. GE's History b. GE's Nowadays c. Organizational Structure 2. Processes of strategic management a. Analysis i. Organizational Resources ii. Vision, mission iii. SWOT iv. Strategic advantage v. Porter's 5 forces b. Formulation i. Strategic objectives (major goals) c. Implementation i. Strategies ii. Resistances to change 3. Conclusion 4. References 1. Introduction a. GE's History 1876 was the year that Thomas Alva Edison opened a laboratory in Menlo Park, New Jersey, where he could explore the possibilities of the dynamo and other electrical devices that he had seen in the Exposition. Out of that laboratory was to come perhaps the greatest invention of the age - a successful incandescent electric lamp. By 1890, Edison established the Edison General Electric Company by bringing his various businesses together. During that period, a competitor emerged. The Thomson-Houston Company became a dominant electrical innovation company through a series of mergers led by Charles A. Coffin, a former shoe manufacturer from Lynn, Massachusetts. As both businesses expanded, it had become increasingly difficult for either company to produce complete electrical installations relying solely on their own patents and technologies. In 1892, the two companies combined. They called the new organization the General Electric Company. b. GE Nowadays The General Electric Company, or GE (NYSE: GE), is an American multinational conglomerate corporation incorporated in the State of New York. The Company operates through five segments: Energy Infrastructure, Technology Infrastructure, NBC Universal (NBCU), Capital Finance and Consumer & Industrial. In 2010, Forbes ranked GE as the world's second largest company, based on a formula that compared the total sales, profits, assets, and market value of several multinational companies. The company has 304,000 employees around the world. General Electric activates in Romania since 1984. The company has 6 subsidiaries, by which only three are present in Romania: GE Healthcare, GE Money, and GE Energy Services. ...read more.

Build. Each of these is merely a word without one vital element. Lead. GE is already synonymous with leadership. But with this mantle comes responsibility. And it's not just a responsibility to maintain the status quo or manage what worked yesterday. It's the bigger responsibility to change. Vision Statement - "Where we are going" Inventing new alternatives of fuel by respecting their "ecofriendly policy". This is the vision of the entire General Electric. As for the vision of Romanian branch only, the vision is to build in the next two years an oil-based electric power plant for Petrom. This plant is supposed to cover up at least 10% of the total power energy produced and distributed in Romania. As already 9% of the total of power energy distributed in our country comes from the eolian turbines, General Electric Romania is trying to increase the number up to 20% in the next 5 years. In conclusion, General Electric Energy Services Romania has the vision to monopolize slowly but sure the entire building of electric power infrastructure in Romania. iii. SWOT analysis Strengths * The brand is well-known and it is associated with a good reputation * The financial capabilities are high, as GE Romania has access to GE's international fund * The competition is insignificant in this domain * The quality of the products and of the services is high Weaknesses * The risk that the company assumes when starting a new project is high (For instance, building a generator lasts for 7 years and the costs are estimated at over $7 bill.) Opportunities * Romania has a lot of natural resources, therefore it can be transformed in the biggest wind-driven farm in Europe * The partnership with Petrom for creating a new power plant will increase the revenues Threats * Finding other alternatives beside calling GE for maintenance work by the ones who cannot afford it ( e. ...read more.

i. Resistances to change When implementing a change resistances may occur. The persons who oppose to change are the inhibitors. The possible resistances to change that may be caused by: * Differences between cultures. For the partnership between Metka and GE two different cultures may get along in order to reach common objectives. The differences between Greek culture and Romanian culture can create divergences. Also, there are cultural differences between top management team and the Romanian employees. The Romanian employees have to comply with the decisions from the headquarter, Nevada. Every incremental change has to be approved from the mother company GE USA. So, even though a change agent from GE Romania wants to start the process of implementing a change, the first step is to seek for approval. There are cases when people didn't agree with US managers and they refused to do certain things, this leading to a conflict. * Decision taken by the top management team without consulting the employees. The Romanian employees are often dissatisfied when the top management team from USA takes decision without consulting them. The Romanian team must comply with their decisions even though they not agree with it. These types of unannounced changes create divergences between employees and the management team from USA. 3. Conclusion General Electric Romania has the reputation of a large company that respects its employees. Talent is the lifeblood of this organization, and GE views employees as its highest-priority resources. GE's Romania people number nearly 2,000. Strategic management is the set of managerial decision and action that determines the long-run performance of a corporation. It includes environmental scanning (both external and internal), strategy formulation (strategic or long range planning), strategy implementation, and evaluation and control. The study of strategic management therefore emphasizes the monitoring and evaluating of external opportunities and threats in lights of a corporation's strengths and weaknesses. General Electric, one of the pioneers of the strategic planning, led the transition from the strategic planning to strategic management during the 1980s. By the 1990s, most corporations around the world had also begun the conversion to strategic management. 4. ...read more.