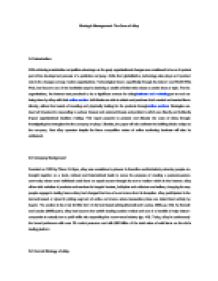 Strategic Management: The Case of eBay

Strategic Management: The Case of eBay 1.0 Introduction With achieving sustainable competitive advantage as the goal, organisational changes are considered to be an important part of the development process of a particular company. Aside from globalisation, technology also plays an important role in the changes among modern organisations. Technological boom, specifically through the dotcom and World Wide Web, had become one of the inevitable ways in obtaining a wealth of information about a certain issue or topic. For the organisations, the Internet was perceived to be a significant avenue for doing business and marketing per se such as being done by eBay with their online auction. Individuals are able to obtain and purchase their needed and wanted items directly, without the hassle of traveling and physically looking for the products through online auctions. Strategies are deemed important in responding to various internal and external threats and problems which can directly and indirectly impact organisational decision making. This report purports to present and discuss the case of eBay through investigating the strategies that the company employs. Likewise, the paper will also address the building blocks unique to the company. How eBay operates despite the fierce competitive nature of online auctioning business will also be addressed. ...read more.

These acquisitions aid in the expansion and improvement of the company's services. EBay's boldest and most costly effort of gaining greater name recognition began in August 1998, when it entered into a three-year marketing deal with America Online (AOL) aiming at further enhancement of the site and value-adding features to be established. Other online allies include Kinko's, First Auction, Z Auction, Netscape and GO.com. Broadening the products and services portfolio was another priority strategy for eBay, reaching to almost 3, 000 categories. At the onset, eBay utilised content-specific chat rooms and bulleting boards to provide real-time interface between buyers and sellers; customised home pages were also sought. EBay also collaborated with an online portal of the collectibles in exchange of affiliation referrals for Collecting Channel. Regional auctions were also established, focusing mainly on profitable markets in the US. It is believed that these regional auction sites could localise products while also providing buyers with the advantage of cutting off shipment or delivery charges. Such strategy was known as co-adoption where eBay diversified the firms into units and then collaborated with individuals within the system. Such action was known to be an element of expanding the traditional business model where eBay now shifts its focus on exploiting economies of scale and scope and extending offerings to new market segments (Brown and Eisenhardt, 1998). ...read more.

Fable was more focused on short-term successes, missing the opportunities for new products growth. In opposite, one of the primary objectives of eBay was to strengthen products and services portfolio as evident by the incessant acquisitions of alliances and partnerships to boost categories and site features and functionality. Compared to Fable which is highly dependent on 'repeated layering', eBay is an epitome of a well-developed organisational structure where the top management especially Pierre was willing to accept what he cannot do for eBay and resorting to seeking the help of strategists such as Skoll and Whitman. For eBay, change is an opportunity that must be taken advantage instead of seeing it as a threat (Brown and Eisenhardt, 1998). Finally, Fable was not able to reap the benefits of changes but for eBay, the company is equipped with the capability to transition while maintaining a superior performance. 5.0 Conclusion EBay is well aware that in order for the company to maintain its competitive advantage and make it sustainable in the long run, the company must take advantage of the changes at the corporate, organisational and business levels. EBay embraces the five building blocks which are applied randomly throughout eBay's history: improvisation, co-adaption, regeneration, experimentation and time pacing as evident by the strategies discussed. The company also embraces the 10 principles of competing on the edge about strategy, organisation and leadership. 6. ...read more.