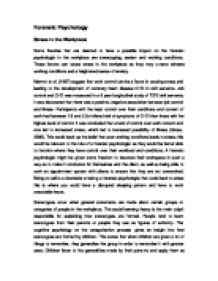 Forensic Psychology Stress in the Workplace Some theories that are deemed to have a possible impact on the forensic psychologist in the workplace are stereotyping, sexism and working conditions. These factors can cause stress in the workplace as they may create adverse working conditions and a heightened sense of anxiety. Marmot et al. (1997) suggest that work control can be a factor in causing stress and leading to the development of coronary heart disease CHD in civil servants. Job control and CHD was measured in a 5 year longitudinal study of 7372 civil servants; it was discovered that there was a positive, negative association between job control and illness. Participants with the least control over their conditions and content of work had between 1.5 and 2.2x inflated risk of symptoms of CHD than those with the highest level of control. It was concluded that a lack of control over work content and rate led to increased stress, which led to increased possibility of illness (Gross, 2008). This would back up the belief that poor working conditions leads to stress; this would be relevant to the role of a forensic psychologist as they would be better able to function where they have control over their workload and conditions. A forensic psychologist might be given some freedom to decorate their workspace in such a way as to make it conducive for themselves and the client, as well as being able to work an appointment system with clients to ensure that they are not overworked. Being on call is a downside to being a forensic psychologist that could lead to stress this is where you could have a disrupted sleeping pattern and have to work unsociable hours. Stereotypes occur when general statements are made about certain groups or categories of people in the workplace. The social learning theory is the main culprit responsible for explaining how stereotypes are formed. ...read more.

This shows that stereotyping is a mainly subconscious process. However, there are some types of stereotyping that are worse than others. These stereotypes highlight the bad characteristics of people. People do not like to be called these terms because they are offensive. These terms are well known to other groups of people (Romascavage, 2005). People struggle to remember detailed and complex words; as such those words are substituted with simpler terms. An example of this is that people would much rather remember the word 'smart' than 'intellectual'. This causes a problem as the stereotypes have the potential to become inappropriate. They can be inappropriate because some will give the wrong impression of a person. This leads to the workplace becoming a hostile environment for that worker, leading to stress and stress related illnesses. Stereotypes are oversimplified terms, so therefore should not apply to every single person in a group, such as 'geeks', or 'gossipers'. People unfairly labelled by stereotyping will normally become stressed because that stereotype is giving a false image of them. In a way, the stereotype is responsible for falsifying that person's true identity. If people already have assumptions about a person, then it is likely that those workers will not make the effort to truly get to know the stigmatised person. Stereotypes are difficult to erase completely or even just to alter. People do not tend to forget the simple ways to remember other people and in order to erase a stereotype, the group of people who maintain that stereotype would either have to try and get an entirely new image or the members might need to disassociate themselves from that group to no longer be 'tarred with the same brush' (Romascavage, 2005). Stereotyping and stigmatism affects people in the workplace who fall victim to devaluation by colleagues or management. Allison (1998) discovered that devaluation in the workplace exposes stigmatised people to stigma-related stressors. ...read more.

These conclusions tend to suggest that if the factors such as stereotyping and degradation of women do not occur in the workplace then the stress placed on female employees is greatly reduced. This also appears to be the case if promotional opportunities are equally available to women as men. It also concurs with Marmot et al. study suggesting that heavy demand and low control appear to increase health risk induced by the stresses placed on the employees. Repetti et al. also said that employed women may experience a multitude of work-related stressors, yet they appear to be better off than women who are not employed. In conclusion stress can impact on a forensic psychologist in many ways and from many stressors. Lack of control over work appears to be a large factor in causing many stress induced illnesses such as CHD, this is tackled by making it compulsory for the psychologists to attend counselling sessions to ensure their safety and levels of stress are ok. This lack of control could come from not knowing what the client is going to disclose or uncertainty as to when their next job is going to be. As mentioned before women may be under more stress as this is a male dominated field although the research mentioned in this essay has also shown that some women thrive on this pressured and biased environment. All that can be said is that there are stressors in every workplace and how a person deals with them will ultimately decide how stressed they become. Reference Gross, R. (2008). AQA (A) Psychology for AS. London: Hodder Education Ltd. Levin, S. (2008). Stigma and Group Inequality: Social Psychological Perspectives. New Jersey: Taylor and Francis. Long, B. C., & Kahn, S. E. (1993). Women, Work, and Coping: A Multidisciplinary Approach to Workplace Stress. Montreal: McGill-Queen's University Press. Romascavage, S. (2005, August 12). The Psychology of Stereotyping. The Muhlenberg Weekly , p. Focus. ?? ?? ?? ?? ...read more.