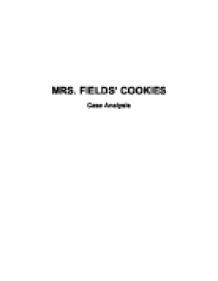 Success and Failure at Mrs. Field's Cookies. The secret ingredient in Mrs. Fields business concept is providing freshly baked and incredibly tasty cookies at each store.

MRS. FIELDS' COOKIES Case Analysis Introduction 3 Business Concept 4 Customer definition 4 Value proposition 5 Product/service 5 Distribution channels 5 The Success of the Business Model 6 What went wrong in the company? 7 Feasibility Analysis 8 SWOT Analysis 9 Strengths 9 Weaknesses 10 Threats 12 Opportunities 13 Could the company be managed differently? 14 Mrs. Fields' Cookies Today 15 Recommendations 16 Works Cited 17 Introduction Mrs. Fields was founded by Debbie and Randy Fields in 1977 as bakery shop. Debbie Fields decided that it's time to do something on her own to get out of her husband's shadow, and started doing what she knew best - baking chocolate chip cookies. Even though her friends and family didn't support her idea, she was persistent and started her first cookie store in Liddiocoat's Market in Palo Alto. Things got even worse when she didn't manage to sell even one cookie on the first day. Afraid that she is going to fail, she took the cookies and gave them away to people on the streets as free samples which attracted them to come back and buy. The second store opened at the Pier 39 shopping area in San Francisco proved that people loved Debbie's cookies because they were waiting in lines which caused problems to neighboring business. That was a clear indication that there is demand for more stores which resulted with 70 stores in 1982. The pressure of expansion intensified development of innovative computer software which helped them to monitor stocks, plan daily production schedules, order materials automatically, easily communicate with headquarters, handle payroll and improve employee training. The software was so successful that Randy started subsidiary named Fields Software Group and started selling his artificial intelligence store management software. However they had a setback in 1988 when they closed 85 out of their 500 stores, and lost about $19 million which resulted as consequence of the bad relationship with the British investors who felt deceived. ...read more.

Mrs. Fields mistake was that she was unable to correctly answer the question how is the company going to support the growth because the debt was wrong answer. Debt is interest bearing first of all, which highly affects net income and more important, owner's investment in the case of such an expansion was better solution. In conducting feasibility analysis, it is crucial to address the question if some change in normal economic cycle occurs, how is that affecting the business in question and what a business can do in order to lessen that impact. Mrs. Fields failed to address this problem and continued to sell its cookies for one dollar per cookie, which given the economic recession in early 90's was very expensive. SWOT Analysis Strengths First, we should mention that the most important issue that adds to the success of Mrs. Fields is that she specialized in a job that she knew how to do it, based on a skill that she had - she knew how to make good cookies. Her idea of giving samples was a very innovative one, but it was the quickest way to attract customers and have immediate observation whether they like your product or not. Although free samples remained the cornerstone of her business, more and more companies are adopting actually this method of attracting customers and ensuring them about the quality of your products. Mrs. Fields is customer oriented and she wants to maintain the same quality as the one she was offering from the first moment. This is shown when she refused to replace higher cost raisin with lower cost ones but with lower quality. Moreover, she constantly puts attention on quality, as she states that her cookies should be always fresh or at most two hours out of the oven. The training sessions seem to be very useful as Mrs. Fields is not only teaching them her expertise, but also allowing them for their own development, as each manager was so well-prepared that they could recognize which cookies they have baked. ...read more.

Moreover in 2008 it announced preparing for chapter 11, meaning that due to the huge debt it had the company had to go bankruptcy. Through the chapter 11 protection Mrs. Field made the following agreements: to continue paying the salaries, wages to employees, to continue offering the same products and services to the company's partners and franchisees, continue pay suppliers and vendors for the products and services offered to the company. The company was said to emerge from chapter 11 within 45 days, and actually it emerged from bankruptcy on 28 October 2008. Today the stores Mrs. Fields are about 390 located in the United States and about 80 stores worldwide, having stores in Australia, Kuwait, UAE, Greece, Panama, Philippines, Saudi Arabia, Hong Kong, Jordan, Canada, Singapore. Recommendations For what we've seen in this case, we shall say that in the future, company should pay closer attention to market changes and act accordingly. For example, if there is a recession in the economy they should try to lower the prices, if their competitors are wining customers and "stealing" market share they should try another strategy and so on. Also, the very important is the way they are going to finance their operations. Evaluate the degree of risk of borrowing, and determine to what extent company is to be leveraged; and of course try to raise capital by owner's investments. Moreover, looking at the places where the company has stores it will be a good idea to try to expand even to more locations as Europe represents a very good direction for some future investments. Moreover, the managers should pay close attention the company's identity and try to keep the image through the years, which is mostly connected with the production of cookies. Once entered a certain market, and once having won a place in customer's mind and heart a company should try to maintain their reputation and not change it constantly by choosing different paths - producing different products and thus confusing the customers. ...read more.