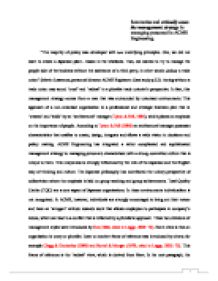 Summarise and critically assess the management strategy to managing personnel in ACME Engineering.

Summarise and critically asses the management strategy to managing personnel in ACME Engineering.

“The majority of policy was developed with two underlying principles. One, we did not want to create a Japanese plant... based in the Midlands. Two, we wanted to try to manage the people side of the business without the assistance of a third party, in other words without a trade union” (Martin Lawrence, personnel director ACME Engineers: Case study p.2.2). Acting without a trade union may sound ‘cruel’ and ‘radical’ in a pluralist trade unionist’s perspective. In fact, this management strategy comes from a man that was surrounded by unionised environments. This approach of a non-unionised organisation is a professional and strategic business plan that is ‘created’ and ‘build’ by an ‘architectural’ manager (Tyson & Fell, 1986), which places an emphasis on the importance of people. According to Tyson & Fell (1986) an architectural manager possesses characteristics that enables to create, design, integrate and allows a wide vision in decisions and policy making. ACME Engineering has integrated a rather complicated and sophisticated management strategy to managing personnel, characterised with a strong committed culture that is unique to them. This uniqueness is strongly influenced by the mix of the Japanese and the English way of thinking and culture. The Japanese philosophy has contributed the unitary perspective of collectivism where the emphasis is laid on group working and group achievements. Total Quality Circles (TQC) are a core aspect of Japanese organisations. In these environments individualism is not recognised. In ACME, however, individuals are strongly encouraged to bring out their voices and have an ‘arrogant’ attitude towards work that allows employees to participate in company’s issues, which can lead to a conflict that is reflected by a pluralistic approach. These two divisions of management styles were introduced by Fox (1966, cited in Legge, 2005: 73). Fox’s view is that an organisation is unary or pluralist. Later on another frame of reference was introduced by others; for example Clegg & Dunkerley (1980) and Burrel & Morgan (1979,cited in Legge, 2005: 73). This frame of reference is the ‘radical’ view, which is derived from Marx. In the next paragraph, the more sophisticated frames of references will be discussed which contrasts more with the way ACME are operating. It will also cover the styles and practices ACME is using towards recruitment, retention, appraisal, pay, power, and control.

Just when you think it cannot get more complicated than this, it gets even more complicated! Purcell et al (1987: cited in Legge, 2005: 74-79) describes other styles of frames of reference labelled as the ‘traditionalist’, ‘sophisticated paternalist’, ‘consultative’, and ‘constitutionalist’. Placing ACME in just one of the stated patterns would give a wrong picture of the way they operate. Martin repeatedly placed the emphasis on the importance of people (Case study p. 2, 3, 4, 6, 8 etc.). He confidently states that the “biggest variable, the biggest difference, the most out-with their control, and the only thing that was going to make the technology and the investment work, was to get the people side right” (Case study p. 2.4). Sophisticated paternalism is the most relevant to ACME’s approach. However, for ACME both individualism and collectivism (working in groups and TQCs) are equally important. Therefore, consultative can also be considered as one of the frames of reference that ACME uses with one big difference: consultatives embrace trade unions and the other bans them. Indeed, it is possible to say that ACME has a unique strategic management strategy to personnel, where two combined frames of references have emerged/integrated into each other, creating a new category of frames of reference that is mainly relevant to ACME’s management.

ACME’s practices are mainly mixed in perspectives. Recruitment and selection were used as control mechanism to exercise the unitary perspective of oneness of the company. The company is situated in a small place in the Midlands where all people know each other and rumors fly around. Attracting people from outside this place is very unlikely. This Marxist approach is beneficial because he encourages exploitation, which leads to the fact that all potential workers will have similar societal values. Another control mechanism within recruitment was to recruit fresh minded youth with high attitude and arrogance that would be a challenge to manage and that did not have ‘too many preconceived ideas’. By the time they have the job, they would have been through two interviews, a psychometric test and obtained references. This will give the new worker a sense of achievement and importance. Recruiting family and relatives is another strategy to get more involved in family matters where you can gain more knowledge about their situation. The more it is known, the more controllable it becomes (Townley, 1994:5). Controlling the workforce via various practices is an effective way to retain the workforce in the company. Building relationship with workers and the family of workers where they can depend on the organisation is a very paternalistic approach for controlling.

Pay is very much related to the individual performance within a team. Yes, if an individual did well and the rest of his team did not, than nobody will get a good appraisal in that team. This way, individuals will push each other to do their job without a supervisory eye watching them. They have an egalitarian work patron where they can solve little issues within their team. This yearly appraisal is not some routine that both parties just want to get over with, workers cannot wait till appraisal time comes, says Martin. Workers have an average salary when they enter the company. Depending on the individual’s performance in his team, the pay can get more. Salaries vary also from different grades and skills from each individual. Martin does not speak of skilled, semi-skilled or unskilled for a reason. Because mainly the workers that are under the unskilled grading, will feel effected and see this as a negative thing. And indeed, it does sound negative and demotivating. Therefore, using grading like C for skilled, B for semi-skilled, an A for unskilled. Psychologically, telling somebody that you are in an A grade work patron, makes them feel they still are an important asset for the company.

Therefore it can be said this Japanese English organisational growth is based on personnel management policies that are integrated, flexible, skill-based, treat employees as investments, with value added orientation and behavioural or environmental aspects. Giving the freedom to teams and groups to work in an egalitarian way has given the workers more space, motivation, and commitment to work harder. On top of that, this hard work will be rewarded with an annual pay rise based on their performance as a team and individuals. The sophisticated paternalism has created one big family working together with a strong cultural relationship. It has not taken away unitary perspective away from employees, at the same time, the employer did not have to vow for the entrance of trade unions. This company is built on values from two completely different societal cultures where only the ‘good’ practices were picked and the ‘bad’ practices were left alone. Paternalistic strategies performed by ACME to have a good reputation among the worker’s families and also the wider community, is a future based strategy. Doing favours for the workers and for the family of the worker has given a ‘buzz’ among workers, and the people around the workers. Power is associated with practices, techniques and procedures. Power is exercised rather than held. Power is productive, in a sense that it creates objects. Power is positive and creative not just negative and repressive. That is exactly how Martin is using power to control the workforce without giving them the feeling that they are under pressure.