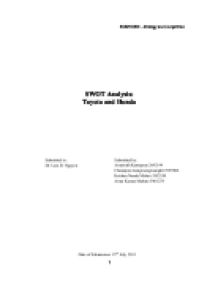 SWOT Analysis. The objective of the paper is to analyze Toyota and Honda in the passenger car segment as well as to recommend strategies to Toyota Thailand to remain ahead of the competition.

BUSN 6200 - Strategy and Competition SWOT Analysis: Toyota and Honda Abstract Thailand's automotive industry is one of the major industries that drive Thailand to become global player in this sector. Currently Thailand's automotive sector is ranked 12th worldwide and aiming to be rank number 10 within the next 5 years. Therefore, the common interest focuses the competition of car makers in Thailand. The objective of the paper is to analyze Toyota and Honda in the passenger car segment as well as to recommend strategies to Toyota Thailand to remain ahead of the competition. The passenger car segment is the second largest segment (33.4%) in the Thai market after the pick-up segment which is the largest segment (65.1%) in the overall automobiles. Toyota Thailand covers 41.2% total of the automobile market in Thailand. Toyota Camry and Honda Accord are used as the examples for the comparison. The approach is to use SWOT as the analytical model and use database from internet, companies as well as field data by visiting the car dealers. In term of specification wise, both models are almost indifferent. In term of after sales, the services provided to the passengers are also the similar except Honda Accord has the 24-hours road side assistance service. It is the advantage of Toyota Camry to have lower car prices and higher resell prices compared to Honda Accord. Toyota Thailand also has the advantage over Honda Thailand on net-income as seen on common-sized income statement. Toyota had 3.76% net-income as percentage of sales over Honda of 1.13% in year 2009. Both companies have their own production systems. Toyota is synonym with Lean manufacturing while Honda developed its own Honda Production System (HPS). Recent recalls of Toyota Camry in the U.S. tarnished the image of the company and slipped its rating in its market popularity. Trade agreements in ASEAN region help Toyota Thailand to garner the opportunities by increasing the customer base because of non tariff benefits. ...read more.

However, this is probably because of the new Toyota plant which aims for capacity of 180,000 units a year that had just begun the production in year 2007. From financial leverage management, Toyota has D/E ratio of 0.9 times while Honda has 10.1 times. This shows that Toyota uses less debt to finance its assets; hence it implies that Toyota has healthier cash position and has more ability to generate new funds. From profitability ratios perspective, Toyota has considerably higher net profit margin (3.76% vs. 1.13%) and ROI (12.4% vs. 4.10%), meaning that its investment is more efficient. But Honda has significantly higher gross profit margin (15.49% vs. 7.78%) and ROE (45.45% vs. 23.68%) which means Honda has better cost control and can generate more returns to the shareholders. In brief, Toyota is very strong for both revenue and profit, although it has higher COGS than Honda. This might due to its various types of models and facilities. However, Toyota is still able to generate better D/E ratio and deliver higher ROI. 2.1.4 Production Excellence The reason why The Toyota way or Toyota Production System (TPS) is well known and widely acceptable is probably because Toyota was the company that had highest profit among Japanese companies in year 2004 (which is the year that Toyota Way book was launched) and also broke its own record in year 2005 with approximately 10,000 million USD cash on hand7. It is even said that TPS is the new revolution of mass production after Ford's invention. This system has been duplicated and used worldwide. Toyota Production System's main concept is Lean manufacturing, continuous improvement and 7 wastes. TPS is designed to cut out overburden and inconsistency, and to eliminate waste8. TPS also value its people with the principle of respect for people and teamwork. Toyota production line is designed for the "pull system" which is derived from the customer order and then moved down stream to the warehouse, then finally to its production line. ...read more.

the recall problem creates the unreliable feeling to buyers in the same recall car models, and 3) Toyota's small cars are more commonly used as Taxi which it makes the brand look cheap and not so prestigious, though it helps generate more selling volume. On the other hand, people would think of Honda more when they want to buy the passenger car. By having a lesser variety of cars, Honda is able to create more prestige in their brand image. The second recommended strategy is that Toyota should launch the marketing campaign to build trust for buyers in term of quality since it is manufactured in Thailand and it is not affected from the recall problem in the U.S. Moreover, if the volume is allowed, it is maybe a good idea to make some minor changes in taxi car, so that buyers would not feel that their car is exactly the same model as a taxi. Honda already launched its Eco car named Brio in March this year and their sale of 5,000 units a month is considered very successful. However, Brio uses a lot of imported parts from Japan. Tsunami affects the shortage of their imported part and could not be manufactured for two month in April and May. In June, the capacity of Brio could run back at 80% capacity rate and planed to come back to normal production in September this year21. Honda's Eco car is launching this year, pushing one step ahead of Toyota, in which Toyota plans to launch its Eco car next year. Nonetheless, due to Honda's parts shortage problem, Toyota should take this opportunity to shorten the launching time of its Eco car. The last recommended strategy is that Toyota should take their opportunities both AFTA and exchange rate to find lower source for parts and components. In that case, not only the COGS could be reduced, but also might be able to lower the price. In the meantime Honda uses more localization parts; it might take longer time for Honda to change their sourcing. ...read more.