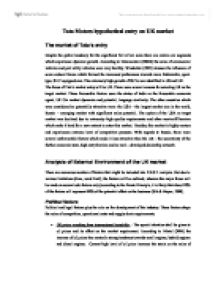 Tata Motors hypothetical entry on UK market The market of Tata's entry Despite the global tendency for the significant fall of car sales there are certain car segments which experience dynamic growth. According to Datamonitor (2006b) the sales of commercial vehicles and port utility vehicles were very healthy. Windecker (2005) stresses the influence of socio-cultural forces which formed the increased preferences towards more fashionable, sport-type, SUV equipped cars. The extremely high growth of SUVs was identified in US and UK. The focus of Tata's market entry will be UK. There were several reasons for selecting UK as the target market. These favourable factors were the status of India as the favourable economic agent, UK Car market dynamics and potential, language similarity. The other countries which were considered as potentially attractive were: the USA - the largest market size in the world, Russia - emerging market with significant sales potential. The option of the USA as target market was declined due to extremely high quality requirements and other non-tariff barriers which make it hard for a new entrant to enter this market. Besides, this market is highly mature and experiences extreme level of competitive pressure. With regards to Russia, there were several unfavourable factors which made it less attractive then the UK - the uncertainty of the further economic state, high entry barriers and no well-developed dealership network. Analysis of External Environment of the UK market There are numerous number of factors that might be included into P.E.S.T. analysis. But due to various limitations (time, word limit), the factors will be outlined, whereas the major focus will be made on several sub-factors only (according to the Pareto Principle, it is likely that about 20% of the factors will represent 80% of the potential effect on the business (Wit & Meyer, 1998). Political factors Political and legal factors play the role on the development of the industry. ...read more.

The emerging opportunities requires the extremely high level of operational responsiveness and leaves little space till market opportunity will be leveraged by competitors. Buyers' bargaining power Due to high intensity of competition on the global scale and increasing overcapacity issue UK buyers experience very strong bargaining power. According to Mintel (2006) buyers have indicated a high level of bargain-seeking behaviour. Suppliers' bargaining power Though vehicle manufactures have consolidated forming large entities it did not make a significant shift of bargaining power in OEM-suppliers relations. According to Veloso & Kumar (2002) the consolidation in the OEM sector has triggered the corresponding consolidation of different supplier groups. Demand chain partners, car dealers, especially the large ones do experience large bargaining power in the light of the overcapacity issue. The threat of Substitutes Apart from direct competitors (public transport) cars compete with other transport services: air, rail and sea. The increasing importance of door-to-door transportation and environmental concerns decrease the current threat of other transportation means as substitutes. One of the major sources of substitute threat comes from the sales of second-hand cars. According to Mintel (2006) the steady accumulation of second-hand cars has become on of the major reasons of the dramatic fall of the sales of new cars. Threat of New entrants The high level of entry barriers (extremely consolidated industry, well-developed value-added chain, R&D capability, investment capability in promotions and new product development) minimises the threat of new entrants. Nevertheless, due to globalised nature of the industry the notion of new entrant is not that clear-cut, since existing players might enter new geographical markets. Datamonitor (2006) stresses the future potential of Chinese manufacturers to flood EU markets in case protectionist measures are not introduced by EU countries. SWOT analysis Assessing the external and internal environmental factors, the following picture can be drawn: Strengths: * Strong revenue growth - According to company's annual report (Tata Motors, 2006) the company registered strong operational growth of 32,5%, whereas the revenues from the international operations grew by 149%. ...read more.

50% of marketing budget will be allocated to TV advertisings, 25% - promotional activities in Car and Life style Magazines. 25% - will allocated for point of sales promotions, events and co-marketing activities. To increase the level of coverage the company will look for partnerships that can strengthen its promotional appeal. Conclusion The paper suggested that Tata Motors should enter the UK market. This country was chosen due to the presence of the number of favorable business and environmental factors such as economic stability, relatively medium entry barriers, positive growth of certain car market segments and the future growth potential within EU whereas the UK might be used as expansion base. The analysis of business factors indicated the importance of choosing fast mode of entry and the development of contractual relationships with UK operating market agents. To address this issue the paper suggested that the company should use contractual joint venture as the mode of UK market entry. This strategic option will provide Tata Motors with fast market penetration, access to market knowledge and reduced financial strain. At the same time, possible negative aspects of this choice should be counterbalanced. The analysis of internal factors revealed that the company's performance is strongly dependent on the success of operations in Indian market, which might be undermined with the further increase of competitive pressure. To strengthen its position against aggressive tactics of competitors Tata Motors is suggested to focus on building customer relationships and employ marketing tools designed to increase the level of customer loyalty. On the basis of the analysis of current market dynamics Tata Motors is advised to enter the market with SUV model, designed for sport type oriented individuals, who look for a relatively cheap, environmentally friendly, high quality car. The price will be one of the attractive factors, especially for price-sensitive individuals. The company will launch advertising campaign designed to create awareness about car, communicate its advantages and persuade customers to buy it. As for the Place Mix, the company will seek to cooperate with various car dealers and will develop e-commerce facilities to maximize the product availability. ...read more.