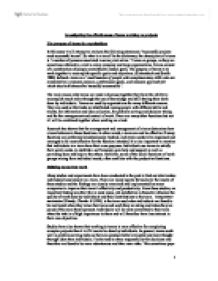 Teams. In this essay I will attempt to evaluate the following statement, successful projects need successful teams.

Investigating the effectiveness of team working on projects

The purpose of teams in organisations

In this essay I will attempt to evaluate the following statement, “successful projects need successful teams”. So what is a team? In the dictionary, the description of a team is ‘a number of persons associated in some joint action.’ Teams or groups, as they are sometimes referred to, exist in every company and large organisations. Teams consist of a combination of people committed to mutual goals. The purpose of teams is to work together to accomplish specific goals and objectives. (Katzenbach and Smith 1986) defined a team as a ‘small number of people with complementary skills who are committed to a common purpose, performance goals, and common approach for which they hold themselves mutually accountable’.

The main reason why teams are made is because together they have the ability to accomplish much more through the use of knowledge and skill sharing than work done by individuals. Teams are used by organisations for many different reasons. They are used so that tasks are distributed among people with different skills and talents, for information and idea collection, for problem solving and decision-taking and for the management and control of work. There are many other functions but not all will be combined together when working on a task.

Research has shown that the arrangement and management of a team determines how a team behaves to these functions. In other words, a team can not be effective if many functions are performed simultaneously. Instead, each team needs to be organised and managed to be most effective for the function intended. It is also important to mention that individuals in a team have their own purposes. Individuals use teams to satisfy their social needs, to establish a self concept, gain help and support as well as providing ideas and help to the others. However, some of the social functions of work groups arising from individual needs, often conflicts with the productive functions.

Many studies and experiments have been conducted in the past to find out what makes individuals bond closely in a team. There are many reports formed over the results of these studies and the findings are closely examined and implemented by many companies to improve their team’s affectivity and productivity. From these studies, an important finding was that like in most cases, job satisfaction is found to influence the quality of work done by individuals and their contributions to the team. ‘competence motivation’(Handy, Charles B (1993) is the term used when individuals are found to be motivated when they value their team and work they are doing and when they are proud of the team they represent. Individuals will be most committed to their team when the task is of high importance to them and will therefore have less interest in their own objectives.

Studies have also shown that working in teams is more effective for completing complex projects than it is if it was to be done by individuals. In general, teams work well in problem solving tasks as they can produce better evaluated and more thought through ideas than individuals. Teams tend to share responsibility for decisions and therefore are found to be more adventurous and take more risks. This sometimes pays off when for example, a team may do things that might not follow common procedures but will produce the same outcome, with less time and money having been spent.

The factors that determines a team for its task

There are many factors to be considered when building a team for a task. The main factors can be put into four categories; size, member characteristics, individual objectives and stages of development. As I mentioned earlier, the organisation of a group or team is made to satisfy different functions. Therefore when considering any of the above factors, the task must be considered. i.e., a big project needs a big team.

The size of the team brings forward two main tendencies; having a large team will increase the diversity, knowledge, skills and talent but may also have a negative effect on some individuals as they might participate less than if it was a smaller team.

In teams, there are often a collection of individuals who all have different characteristics and bring different skills to the table. At the Carnegie Institute of Technology, a study was conducted over a year long period where different teams were involved in business game. The findings showed that overall, teams, where its members saw themselves as all being equal in their influence and input, were less successful than those teams that recognised some of their members were better and more superior to others in certain situations. Belbin’s studies also focused on this principle. He stated then in every team, working on a project, there needs to be four main members; the Resource-investigator, the Company worker, the Team worker and the Finisher. From his studies, he also came to the conclusion that, too many of one type will reduce the number of roles in the team and will therefore some tasks may not get done. In smaller groups, some members may need to take on more than one role to keep the balance and satisfy the task.

The third category worth mentioning is individual objectives within a team or group. It is a known fact that if all the members of a group have the same objective, then the productivity and quality of the work would be of a high standard. However, in reality, an individual often have hidden agendas and personal objectives which distract them from committing fully and reduces their affectivity within the group. Some of these hidden agendas may include:

Scoring off an opponent;

Covering up past mistakes”.

Nevertheless, these hidden agendas can be cancelled out at times when the task is so complex and important that personal objectives are put aside. This is usually when all the individuals find a ‘common enemy’ (Handy, Charles B 1993), usually the task.

The development process of a team

Tuckman (1965) discovered that teams usually go through five stages of growth: Forming, Storming, Norming, Performing.  At the Forming stage, team members are introduced. They state why they were chosen or volunteered for and what they hope to accomplish within the team. In the storming stage, all members have their own ideas as to how the process should look, and personal agendas often come out. Storming is probably the most difficult stage for the team. The team members often conflict and argue in this stage as many individuals have their own opinions on how the problem should be tackled and therefore slow progress of the project. In the Norming stage, individual conflicts reduce as the team seeks to establish methods and techniques to tackle the task.  At the performing stage, the team begins diagnosing, problem solving, and implementing changes. By this point, team members have discovered and accepted other's strengths and weaknesses and have established their roles.

Factors contributing to a successful team

Now let’s concentrate on what makes a successful team. The leadership role is an important factor. In a number of studies, it has been found that ‘a powerful leader has a positive effect on the morale of a group’ (Handy, Charles B (1993). It is a known fact that people like working under a respected leader who possesses lots of knowledge and experience in the field of work. In general, groups are more productive when they have an influential leadership. A good leader sets high standards and targets for the group. A study by Deutch, M (1949) found that when good leadership is applied to co-operative groups, they tend to: “be more productive in quantity, produce higher quality and have a stronger push to complete the task”.

Another factor that makes a team successful is how satisfied the members are in the team. I mentioned this earlier but it is found in the studies of Hawthorne that “happy groups are also productive ones” (Buchanan, David A and Huczynski, Andrea A 1977). One of the aims of the management within an organisation is to make team members bond with each other and satisfy their social needs. Whether it’s through the environment they work in or the amount of freedom given to them, satisfaction in their job results in high productivity. The Kretch, Crutchfield and Ballachey model of group functioning1962 was also used to illustrate how different independent variables could affect the outcome of group productivity and member satisfaction. Group cohesion is another factor that increases affectivity in a team because when members all have the same positive drive to reach their targets; the motivation spears them to do better.

Advantages and disadvantage of teams

From the research collected and the information analysed from different author’s perspectives, we can now summarise and evaluate what the benefits and disadvantages of team working are.

The advantages of working in a team

The disadvantages of working in a team

Team working also brings many problems to the development of a project. In majority of cases there are always conflicts between members on decision making as everyone has their way of doing things from personal experience. Other disadvantages of working in a team are:

So does a “successful project need a successful team?” It is evident that many benefits can come out of facing a task with a team but just as well, many problems arise form it. However, advantages often out weigh the disadvantages. From what we have learnt, it all depends on organisation and management for how successful and effective a team will be. Most of the reports studied, focused on the different leadership styles and how they affect the effectiveness and motivation of a team while other reports concluded that there is a high correlation between productivity and member satisfaction. It is therefore important to note that how a team is organised and managed reflects on how successful a team is in satisfying individual needs and in increasing effectiveness.

My final view of a successful team is one that is organised  to have good communication between members, has influential leadership and management, has a good group togetherness with members fully committed to each other. It takes a lot of effort to develop a team that posses these attributes but organisations invest heavily in training a team for its jobs as in the long run it serves highly. Individuals can only manage a project of a certain scale. Quality and time keeping is not possible to be done as well as if it was being managed as a team. It is therefore evident that a successful project needs a successful team. Perhaps, the best conclusion came from one author that said “the only thing more difficult than moving to and operating in teams is operating without them”(kakabadse, Andrew, Ludlow Ron and Vinicombe Susan 1998).

I Love Teamwork - Advantages Of Creating A Great Team found on: