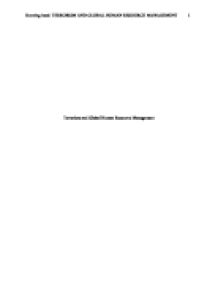 Terrorism and Global Human Resource Management Introduction Globalization is continuing to increase and companies expand their operations to different countries, which results in employing global workforce. Even though the outcome of this process has mostly been positive, some firms have been presented with occasional problems to face (Noe, Hollenback, Gerhart, & Wright, 2008). After September 11th attack has happened, Americans have demanded to the Taliban government to turn in Bin Laden and his leaders, but the demand was refused. That's when the military actions began against that country. This has also resulted in host of issues developing in multinational companies (Noe, Hollenback, Gerhart, & Wright, 2008). For example, companies doing business overseas had to manage their expatriate workforce which had a potential to become a hostile territory. Employees were in fear of their security, and some of them have requested to return back to their countries. Companies with global workforce must manage nationalistic boundaries. People in the United States may have viewed the terrorist attack as an act of war, and the Arab world may have felt the same way about military attacks. An executive have stated that is difficult to manage a workforce that is about 25 percent Arab, and he has also stated that people are concerned about the military attack action in October 2001, as much as they are concerned with the events of September 11th (Noe, Hollenback, Gerhart, & Wright, 2008). How can a global company manage the inevitable conflicts that will arise among individuals from different religious, racial, ethnic, and national groups who must work together within firms? ...read more.

And when it comes to confrontation, or collaboration, the focus has to stay on benefits and the managers need to help keeping that conflict contained with its sources (Brown, 1995). In owls perspective conflicts occur where the tension needs to be reduced, and the relationship needs to be improved between people. Goals and relationships are very important to owls, they see conflicts as problems that need to be solved and the solution found benefits everyone, by doing that, the relationships are being maintained. They are not happy until the solution that satisfies everyone is found, their goal is to not have any negative feelings, and they make sure the tension is resolved (Kamalakkannan, Guarav & Sushil, 2010). How can these conflicts be overcome to create a productive work environment? In order to overcome conflicts arisen among individuals from different religious, racial, ethnic, and national groups who must work together within firms, to create a productive work environment, managers of the company must be able to successfully manage a diverse group. Those in charge must develop a new set of skills to improve their management in diverse workforce. They must be able to communicate effectively with employees from a wide variety of cultural background. They must be able to coach and develop employees of different background, ethnicity, physical ability, and race. The performance based on objective outcomes rather than values and stereotypes must be provided. A work environment that makes it comfortable for employees of all backgrounds to be creative and innovative must be created. ...read more.

Expatriates need to be trained and developed. They should be able to communicate effectively. There is no substitute for local knowledge. Some companies use expatriates who can speak the host country's language. Consideration should be taken in retaining the services of experienced employees or expatriates. Compensation for expatriates is another consideration to be measured. Providing incentives to offset inconveniences being away from home and far from family members or love ones is quite difficult. Salary, wages, housing allowances, transportation costs, cost of living expenditures, and other expenses should be included in the computation of their entitlements. In addition, benefits and allowances should also be considered. The last but not the least, managers should also focus on reacculturation or reintegration of expatriates when they return back to their home organizations. Oftentimes, employees or expatriates change their behaviors having been away for so long. Communication and validation efforts help repatriates in the reacculturation transition process (Noe et. al., 2008). Conclusion Conflicts will always arise in any company, especially to those more diversified organizations. It is crucial that business leaders and managers need to be able to solve or minimize these conflicts through human resource systems to recruit, develop, retain, and use globally competent expatriates, managers, and executives. Terrorism will always exist, until all these evil minded extremist will be eradicated from this earth. Thank God one by one, their leaders are being executed slowly but surely. Human Resource Management will always be required for the successful accomplishment of any business strategic goals around the globe. The challenges of HRM will always remain as conflicts exist. ...read more.