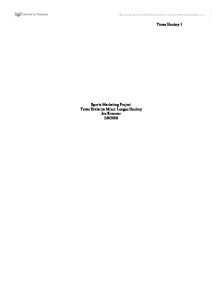 I have decided to talk about how to advertise and promote a minor league pro hockey team in the Central hockey league.  The team that I have decided to talk about is the Texas Brahmas; this is a team that plays in North Richland Hills just outside of Dallas Texas.  I lived in the Dallas area for over a year so I know the area and know that it is a nice area that is very family oriented community.  In this paper I am going to come up with ways to get bigger and a more regular attendance for the team to get to there games.

The research I did on the Texas Brahmas shows that there arena holds 2,300 people.(Brahmas) The Brahmas however pull in a crowd of 1,717 people which is last in the league.(pointstreak) This is 583 empty seats in the arena on an average for every home game.  It is important to get as close as possible or have a full house at these sporting events like this.  These are teams that don’t make much money and need the highest attendance possible to maximize on there profits for there team and program.  To make this possible you have to come up with new ways to advertise your team to the public and attract new people and keep the same ones coming back.

To attract more people to the arena for there games they have to reach out to the people of the community and get there interest in the hockey games that you are offering the people.  Since this is a family oriented community I think that it is important to reach out to the families especially the children.  Lots of parents and children want to get involved in organized sports and with hockey growing especially fast in the state of Texas it is important to reach out to these people.(USA hockey)  Texas is in the Rocky Mountain district of the USA hockey.  Since the Dallas stars have moved to the Dallas area and the two junior A hockey teams and three junior B hockey teams in the state there is a lot of good young talent coming up in the ranks of minor hockey in the state.  With the high growth of hockey in the area and the lack of experienced older players to teach to the new young kids it would be a good idea to get out and give hockey clinics to the people.  With these camps the team would use some of the coaches and players and run camps during the summer time and also during Christmas break.  These camps will give back to the community and help the new younger generation of hockey players some important knowledge on the game of hockey.  By getting to the kids they will want to come see you play and bring there family since they aren’t old enough to get there by themselves.  This will help improve the attendance of the games and bring in new fans.

Another way to attract people to your games is to get a family night going where you give away a family package to a family of four or more.  In minor league sports it is important to give people entertainment to keep them coming back to the games.  Entertainment like this includes giveaways and special promotions.(Book)  These giveaways can be free gift certificates to popular restaurants around the area.  The idea for a promotion that I have is giving away a free zamboni rides to kids twelve and under.  This is a good idea because a lot of little kids love the zamboni and to watch it on the ice.  So I was thinking to put an extra seat on there and give away a free ride to one kid between all three periods.  This will get little kids excited to go to the games and especially if they win a ride on the zamboni.  This is good for kids to be going to these games especially with there family as a good family environment.

The final way to attract fans is to have a former famous hockey player come out to your games.  Darren McCarty a former NHL player started a comeback with the Flint Generals with the IHL.(IHL)  Since the former player came to Flint they started to sell out there games at home.  This is huge because with a former player like him people are starting to come to see him and eventually after he is gone they will hopefully be addicted to the team and watching you guys play.  I think that getting former stars is a good way of getting your name out and also getting recognized by the people in your community.

In conclusion, I think that it is very important to get back to the people in your area and reach out to the families in the area.  This will help build a very good fan base for your team and your arena.  The more people you have coming to your games the more profits you will make and be able to give back to your players.