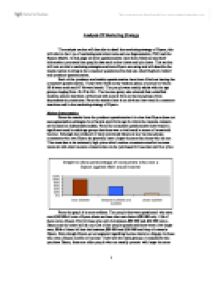 The analysis section will describe in detail the marketing strategy of Dyson, this will refer to the 4 ps of marketing and other tools such as Segmentation, PLC and the Boston Matrix.

Analysis Of Marketing Strategy The analysis section will describe in detail the marketing strategy of Dyson, this will refer to the 4 ps of marketing and other tools such as Segmentation, PLC and the Boston Matrix. At this stage all three questionnaires have been filled out and their information processed into graphic data such as bar charts and pie charts. This section will look at which marketing strategies and tools Dyson are using and will describe the results mainly looking at the consumer questionnaires but also observing both retailer and producer questionnaires. Each of the producer and retailer questionnaires have been filled out leaving the consumer questionnaires. These were filled out by random group of people of whom 53 % were male and 47 % were female. The people were mainly adults with the age groups ranging from 10-18 to 65+. The income group also showed that a stratified random sample had been carried out with people from all income groups from dependents to pensioners. From the results there is an obvious clear trend in consumer reactions and in the marketing strategy of Dyson. Market Segmentation From the results form the producer questionnaire it is clear that Dyson does not use segmentation strategies in all factors apart form age in which the vacuum cleaners are focused on independent adults. From the consumer questionnaire there wasn't a significant trend in adult age groups but there was a vivid trend in terms of household income. Although the producer of have not aimed Dyson at any income groups consumers who own Dyson do generally have a larger income than those who do not. This must due to its extremely high prices which makes consumers smaller incomes make do with other vacuum cleaners that can be purchased for less than half the price. From the graph it is more evident. The people that were questioned who earn over �40 000 all own a Dyson where as those who earn below �20 000 only 11% of them own a Dyson. ...read more.

To identify the elastic demand of Dyson another question was asked. The question asked how consumers would react to a �30 decrease in cost per vacuum cleaner. The producer questionnaire said that this would create a slight reaction in the sense that consumers would strongly consider purchasing a Dyson. The results from the consumer questionnaires backed this up with 50% of consumers saying that they would strongly consider purchasing a Dyson. 40% of consumers said that it would have no affect on them or in anyway attract them to purchasing a Dyson as the prices are so high. When I asked the same question for Electrolux the results were vastly different, 60% of people who did not have an electrolux would go and buy an Electrolux vacuum straight away because of the reduction. 25% of people said that they would strongly consider it and 15% said that it would not affect them at all. This does give Dyson a problem, Electrolux could gain a larger market share by reducing their prices by about ten or twenty pounds and for Dyson to gain sales they would have drop prices even more than �30 maybe �50. The results show that Dyson is a lot less elastic than its competitors such as Hoover and Electrolux, this mainly because of its extremely high prices. Promotion The question which is addressed to the consumers as in which ways can Dyson improve, the first and main way is Price holding 63% of the votes, the second way in which Dyson could improve is Promotion which takes up 18% of the votes. After Price the second weakness that Dyson has compared with its rivals is Promotion. When Dyson is advertising its products it aim is just to inform the consumers not persuade them relying on the consumers to take the first step in buying the Dyson. Dyson also uses very little sales promotion which can be very useful in bringing in consumers especially if it is reducing the price or something that will lower the overall price value. ...read more.

Dyson do use other methods for extension strategies like promote more or lower prices. Dyson at the moment is using extension strategies and gaining more market share as it goes along. The Boston Matrix was answered as high rate of growth and high market share. This is to say that the product is a Star, it is in a high rate of growth which means it sales are rising or growing as they are gradually by using extension strategies. A star has a high rate of growth and produces generates large amounts of money, this is true for Dyson. The relative market share refers to the market share possessed by Dyson and divide by the market share possessed by Dysons fellow rival. This tells the product where it is in terms of market share in comparison with its main competitor. Dyson has the highest relative market share in its specified market and is above any of its rivals. Rivals The top three rivals listed in the producer questionnaire are Electrolux, Hoover and Bosch. The top three in the retailer questionnaire were Panasonic, Electrolux and Hoover, this only applied to Dysons rivals within the retail outlet. Hoover surprisingly is the main rivals according the consumers. Electorlux in terms of market share most probably is but the consumers only picked Hoover because of its brand name. The main difference between Dyson and Electoluxes marketing is that Dyson is bringing out great product full of Quality at a high price and Electrolux is bringing out a product that will do the job quite well at a cheap price. Dyson is the only vacuum cleaner that uses television as it primary source of promotion, Hoover used to use the television but have not recently. Other companies like Electrolux use cheaper mediums like Newpapers and Magazines. The vacuum cleaners are available at most superstores such as Comet but Dyson is has a higher supply and is more available. Overall Dyson has the better product and now possess just under half the market share in the vacuum market, where as Electrolux has half that. 1 ...read more.