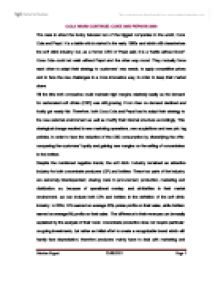 The case is about the rivalry between two of the biggest companies in the world, Coca Cola and Pepsi. It is a battle which started in the early 1990s and which still characterizes the soft drink industry; but, as a former CEO of Pepsi said, it is a bat

COLA WARS CONTINUE: COKE AND PEPSI IN 2006 The case is about the rivalry between two of the biggest companies in the world, Coca Cola and Pepsi. It is a battle which started in the early 1990s and which still characterizes the soft drink industry; but, as a former CEO of Pepsi said, it is a "battle without blood": Coca Cola could not exist without Pepsi and the other way round. They mutually force each other to adapt their strategy to customers' new needs, to apply competitive prices and to face the new challenges in a more innovative way, in order to keep their market share. Till the 90s both companies could maintain high margins relatively easily as the demand for carbonated soft drinks (CSD) was still growing. From then on demand declined and finally got nearly flat. Therefore, both Coca Cola and Pepsi had to adapt their strategy to the new external environment as well as modify their internal structure accordingly. This strategical change resulted in new marketing operations, new acquisitions and new pricing policies, in order to face the reduction of the CSD consumption by diversifying the offer, conquering the customers' loyalty and gaining new margins on the selling of concentrates to the bottlers. Despite the mentioned negative trends, the soft drink industry remained an attractive industry for both concentrate producers (CP) ...read more.

Either way, as in 2004 concentrate producers earned 30% pretax profits on their sales and bottlers earned 9%, the soft drinks business is still profitable, even though it involves commoditized products. Its attractiveness can be explained by analyzing the external environment using Porter's Five Forces Model: both Coca Cola and Pepsi benefit from a market which is protected from existent and potential competitors and where they show a stronger bargaining power then their suppliers and buyers. Rivals - The hard competition between these two giants has strongly affected the structure of the soft drink industry: the smaller, familiar firms, which could not invest in competitive marketing campaigns and could not benefit from economies of scale, were quickly chased away from the market or acquired by Cola (Minute Maid), Pepsi (Tropicana) or Cadbury (Dr Pepper). Therefore, Coke and Pepsi, together with their associated bottlers, in 2004 commanded 74% of the soft drink market and if we also consider Cadbury Schweppes, the top three companies controlled the 89%. In fact, we could characterize the soft drink market as an oligopoly or even a duopoly between Coke and Pepsi, resulting in positive economic profits for the two giants. They traditionally competed primarily on advertising, promotion and new products rather than price, but potentially declining U.S. demand may now encourage more price competition and thus erosion of profits. Substitutes - Especially during the 21st century, the concern about healthy life and low-fat diet became more and more widespread among the Americans. ...read more.

First of all, their ability to create a brand that is easily recognizable and it has become a sort of guarantee of good quality, as well as a symbol of the American culture (especially in case of Coca Cola). It becomes easy to explain why these two giants both adopted a strategy that mostly involves marketing and advertising operations, rather than a price competition. Their competitive advantage is actually based not on low prices or merely on a good operational efficiency (that can still be imitated), but above all on the uniqueness of their brands, which they have reached following similar strategies and adapting their offerings to the external changes (marketing; vertical, horizontal, international integration; product innovation). Pepsi and Cola should now keep their brand unique by adapting their strategy to the changes in the external environment and highlighting their new offers through attentive marketing campaigns. From a technological point of view, they should make their plants more efficient and keep inventing innovative formulas for their products. Considering the social aspect, they should match the customers' care for health (by introducing new non-carb products, sports drinks etc) and the growing concern about ecology (by using recyclable packaging). Finally, as regards the demographic evolution and as American soft drinks market is now in the matured stage of the life cycle, they may stress their international integration, consolidating their presence in the emerging countries, which still present great unexploited business opportunities. APPENDIX Data from - Wikipedia - www.thecoca-colacompany.com - www.pepsi.com ?? ?? ?? ?? Martina Pagani 13/09/2011 Page 1 ...read more.