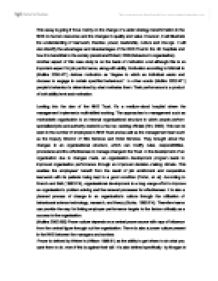 the change of a wider strategy transformation in the NHS on human resources and the changes in quality and value.

This essay is going it focus mainly on the change of a wider strategy transformation in the NHS on human resources and the changes in quality and value. However, it will illustrate the understanding of teamwork, theories, power, leadership, culture and change. It will also identify the advantages and disadvantages of the NHS Trust in the UK hospitals and how it is beneficial to the society (Jerald and Robert, 2003,Behaviour in organisation). Another aspect of this case study is on the basis of motivation and although this is an important aspect for job performance, along with ability. Motivation according to Mitchell in (Mullins 2005:471) defines motivation as "degree to which an individual wants and chooses to engage in certain specified behaviours". In other words (Mullins 2005:471) people's behaviour is determined by what motivates them. Their performance is a product of both ability level and motivation. Looking into the size of the NHS Trust, it's a medium-sized hospital where the management implements multi-skilled working. The approaches to management such as mechanistic organisation is an internal organisational structure in which people perform specialised jobs and authority vested in a few top-ranking officials (Tim, 2002). ...read more.

In addition, this changes led to the management's decision-making over the employees and how the managers can handle the decision made if any crisis occur. Moreover, crisis can happen even if the managers' draw out plans to take up the decision for changes in the hospitals based on the departments concerned (Tim, 2003). The managers may look into situations like staffs undertaking a wider array of task as providing opportunities to show exceptional competence in order for the staffs to have flexibility and teamwork. The classical value of system, traditional organisation theory represents an individualistic, rational approach to life that sets the highest values of achievement (Rokeach, 1972:160). Also, this achievement can be obtained when an employee's performance is well structured such as attendance of workers for an increase in their pay. These are those behaviours which may take up relatively little effort for an individual or a team, but which are very effective for performance in their organisation (Luthans and Kreitner, 1974; 1975). This in the NHS Trust may be restricted for managers in the extent to which they can alter the level of pay scales and benefits, or decision-making about promotions (David, 1990). ...read more.