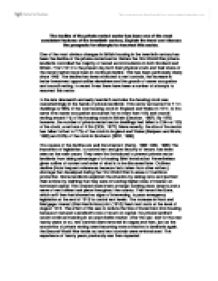 The decline of the private rented sector has been one of the most consistent features of the twentieth century - Explain the trend and discuss the prospects for attempts to resurrect this sector.

The decline of the private rented sector has been one of the most consistent features of the twentieth century. Explain the trend and discuss the prospects for attempts to resurrect this sector. One of the most obvious changes in British housing in the twentieth century has been the decline of the private rented sector. Before the First World War private landlords controlled the majority of rented accommodation in both Scotland and Britain. From 1914 to the present day both their physical stock and their share of the rental market have been in continual decline. This has been particularly sharp since 1945. The decline has been attributed to rent controls, the increase in better investment opportunities elsewhere and the growth of owner occupation and council renting. In recent times there have been a number of attempts to resurrect this sector. In the late nineteenth and early twentieth centuries the housing stock was overwhelmingly in the hands of private landlords. This sector accounted for 7.1m dwellings or 90% of the total housing stock in England and Wales in 1914. At the same time owner occupation accounted for no more than 10% and council renting around 1% of the housing stock in Britain (Daunton, 1987). ...read more.

The experience of twenty years previously was then repeated. The use of legislation to control the level of rents in this way had another serious effect on the private rented sector. Even before 1914 concern was being expressed at the flight of capital from the housing market but as rent controls reduced landlords' profits still further they looked around for better investment opportunities. As a result there was a flow of capital out of Britain, overseas. After 1914 it became even more serious as alternative investments offered a better combination of risk and return. At the same time other forms of housing provision became more attractive to tenants. First of all owner occupation became a viable and more attractive option for households - including those on moderate incomes - for a number of reasons (Ball, 1983). There had, first of all, been a real growth in incomes, and the first Building Societies had become really established. Furthermore - particularly in the inter-war period - the massive development of subsidised public sector housing, built to a standard at least as good as that found in the majority of private sector dwellings, made housing available to those who could not buy. ...read more.

However, all these measures to revive the private rented sector had little impact. The Housing Act (1988) was accompanied by two related measures also designed to make private renting more attractive to investors. The Business Expansion Scheme (BES) was one of them. It offered tax free incentives up to �40,00 to investors prepared to commit money for five years. These incentives meant the subsequent sales of shares in housing developments were not subject to Capital Gains tax. The success of this was limited, however, by the fact that a rate of return of around 9% gross was needed and this was difficult to achieve in the rented housing sector unless the investment was in housing at the upper end of the market. The second measure - in Scotland - had more effect. Scottish Homes was given powers to provide finance in different ways - in the form of grants for example - to private landlords to reduce the supply price of rented provision. Scottish Homes is a National Housing Agency, created on 1 April 1989 from a merger between Scottish Special Describes attempts to resurrect sector by using Housing legislation. Judges effectiveness. (Needs to justify judgement.) Describes attempts to resurrect sector by other legislation. Judges effectiveness. (Justification better. ...read more.