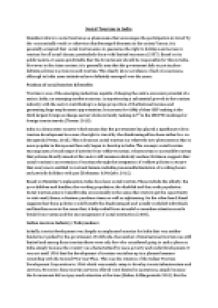 The Development of Social Tourism in India

Transfer-Encoding: chunked ﻿Social Tourism in India Hunziker refers to social tourism as a phenomena that encourages the participation in travel ?by the economically weak or otherwise disadvantaged elements in the society? hence, it is generally accepted that social tourism aims to guarantee the right to holidays and access to tourism for all social classes, particularly those with limited resources (1957). Based on its public nature, it seems predictable that the Government should be responsible for this in India. However, in the Asian context, it is generally seen that the government fails to put in place definite policies to promote such tourism. This clearly shows evidence of lack of awareness, although in India some initiatives have definitely emerged over the years. Position of social tourists & benefits Tourism is one of the emerging industries capable of shaping the entire economic potential of a nation. India, an emerging market economy, is experiencing a substantial growth in the tourism industry with the sector contributing to a large proportion of the National income and generating huge employment opportunities. It accounts for 6.8% of their GDP making it the third largest foreign exchange earner while currently ranking 42nd in the UNWTO rankings for foreign tourist travels (Turner, 2015). ...read more.

However, these tourists services offered were limited in operations, simply because the Government did not pay much attention at the time (Baken, & Bhagavatula 2010). But the Sixth Plan marked the beginning of a new era when the public sector began to consider tourism as a major instrument for social integration and economic development (Lalnunmawia, H 2016). Tourism activities only began to gain momentum in the 80?s. This was partly due to the prospect of the country holding the Asian Games of 1982 so that same year, the National policy was announced whereby the Government gave a sixth point plan to put facilities in place to accommodate these visitors. The main aim of this policy was mainly to ?promote balanced socio-economic development, promote and preserve the rich heritage and culture of India and also create employment opportunities? (Abhuyankar & Dalvie 2013). Whereas, tourism had previously been left to the private sector, the level of Government intervention began to increase, thus paving the way for other forms of tourism development such as the awareness of social tourism. Over the years, the government of India has taken on significant steps to promote the growth of travel and tourism sector. ...read more.

This development is crucial for the government and other regulatory bodies as rural development can serve as a solid platform for the country whereby almost 74% of the population resides in villages with less than 10% having salaried jobs. This ongoing trend of rural tourism in India has been fostered by the growing popularity and interest in its heritage and culture (Nagaraju & Chandrashekara, 2014; Katyal, 2015). The Ministry of Tourism collaborated with the United Nations Development programme (UNDP) to launch the Endogenous Tourism project in 2004, which is directly linked to the existing rural tourism scheme of the government. The scheme was initiated with the idea that selected village destinations could be developed and promoted (through the ?incredible India? marketing campaign) as a popular tourist segment (Balasubramaniam, 2008). The scheme involved the selection of 36 rural sites such as Rajasthan to be used as rural destination development pilot projects (Wharton, 2009). The government?s role involves funding infrastructure development and so far, existing 153 rural tourism projects in a number of states have been sanctioned by the Ministry of tourism (Nagaraju & Chandrashekara, 2014). The aim of this scheme was purely to aid in poverty eradication using rural tourism as a vehicle for the stimulation of economic activities around tourism by giving tourists the opportunity to explore the underdeveloped parts of India (Duttagupta, 2016). ...read more.