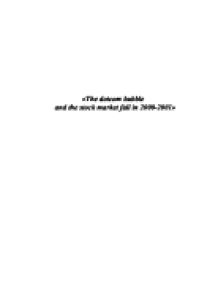 "The dotcom bubble and the stock market fall in 2000-2001" OUTLINE 1. Introduction To introduce the topic, I'm going to address the importance of examining this crisis in detail and describe in a nutshell what actually happened. 2. Main body * The reasons of the dotcom bubble burst * Theoretical explanation of what happens during the financial bubble * What are the consequences of this particular event? 3. Conclusion Summary of the main points covered in my essay. How did the dotcom bubble burst contribute to the economic crisis of the 2008? Could we expect the similar crisis and how can it be prevented? What are the lessons that should have been learned from the dotcom crisis? INTRODUCTION When the global financial crisis occurred in 2008, both experts and general public started heated discussion as everyone was eager to identify the reasons for such a calamity. It is clear that nothing happens with no reason at all. Let's consider the famous speech1 of Ben Bernanke, who is the Chairman of the Federal Reserve System. In that testimony he tried to explain the causes of the recent financial and economic crisis to the Financial Crisis Inquiry Commission, highlighting the vulnerabilities in different sectors of economics. The idea of inadequate risk-measurement that he focused on is very important for us, as this particular issue makes the recent crisis akin to the dotcom bubble we are about to examine in detail. ...read more.

Consequently the rise happens responding to the high demand for stock and many companies thus become grossly overvalued. When the bubble "bursts", the share prices fall dramatically, and many companies are forced to leave the business. In order to be more precise, we can name five stages of any financial bubble5: First. Displacement. When people, especially investors, get enamored by a new paradigm, such as an innovative new technology or dotcom companies, as in our case, displacement occurs. That is the first stage of a financial bubble. Second. Boom. At this stage prices rise slowly at first, following a displacement, but then they gain momentum. More and more participants enter the market. All of them are determined to get prosperous as soon as possible. In case of dotcoms, a huge amount of small companies appeared on the market. The low interest rates in 1998-99 helped to increase the start-up capital amounts. Not all of them possessed innovative ideas, but they were sure that in the wave of e-companies they must succeed. No wonder they all had the same business plan of monopolizing their respective sectors through network effects. However it was clear that all of them wouldn't become successful as the competition was tough. For many of them the "get big fast" plan would fail. During this phase, investors become even more enamored by the asset, considering it once-in-a-lifetime opportunity that increases speculation even more. ...read more.

The financial and economic crisis of 2008 could have been predicted, if everyone was more prudent and learned a lesson from the 2000 dotcom case. In conclusion, I'd like to address the issue of a new Internet crisis that is predicted by some economists. Nowadays World Web companies place their stock at unbelievably high prices. Can a successful Internet project cost more than a huge transnational oil company? The common sense says definitely no, but investors have their own specific point of view. For example, the shares of Groupon, a famous discount service, we evaluated at $12,7 trillions, despite the company's loss of $400 trillions the previous year and gross debt equal to $420 millions. This estimation is not reasonable and very far from reality. Meanwhile, the expected IPO of social network Facebook is evaluated at $100 trillions. It can be the beginning of the Dotcom Crisis 2.0. On the other hand investors are optimistic about e-companies, as they survived the recent global crisis, unlike huge interconnected firms in other fields, such as financial, machinery and so on. However, if the case of Groupon is not unique (which is so, judging by the investors' optimistic mood) the crisis can occur once again. The most important thing in preventing the possible debacle is being prudent. Investors shouldn't be too optimistic and should be sensible when acquiring assets. PR and advertising can be astonishing, however being reasonable means evaluating the real business indicators to make rational decisions. Risk-management is the field that shouldn't be ignored if we want to avoid new crises. ...read more.