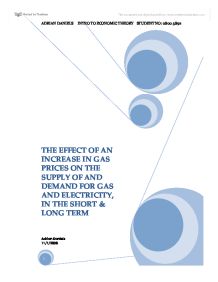 The effect of an increase in gas prices on the supply of and demand for gas and electricity, in the short and long term

THE EFFECT OF AN INCREASE IN GAS PRICES ON THE SUPPLY OF AND DEMAND FOR GAS AND ELECTRICITY, IN THE SHORT & LONG TERM Adrian Daniels 11/1/2008 CONTENTS REFERENCES PAGE 9 The Economist (The Economist, 2008) has reported that energy prices are getting 'higher and higher'. This is especially for Electricity and Gas. Consider an effect of gas prices increasing, being that people will switch to alternative energy providers. For example, from the United Kingdom's number one Gas and Electricity provider 'British Gas', to 'EDF'. This may only apply to people involved in the lower end of the national wealth distribution. People who form the higher end of the national wealth distribution may not even realise the change in price that has been made to the gas and electricity prices. For instance, the '1% of the United Kingdom's population who own 21% of the nation's wealth' (Inland Revenue, 2006) .Thus they are very unlikely to react towards this change. On the other hand, people who form the lower end of the national wealth distribution (such as pensioners) ...read more.

The reason being for people switching over to cheaper utility companies is the size of their income. People would be more likely to afford rises in gas and electricity bills if they were to get a pay rise or promotion. Furthermore, with the world's economic conditions in danger because of the credit crunch situation, goods and services are getting progressively expensive. As a result, Families have less money for their weekly expenditure. So considering the worst scenario, gradually everyone will stop using Gas and electricity because of the rising costs of goods and services. This will put utility companies including Uswitch on thin ice. They have chosen to supply these utility services because the benefits of providing them outweigh the costs it takes to produce these services. Therefore, it will not make sense for these companies to continue providing their services. In the long term, the increase in gas and electricity prices could lead to the failure of utility companies like British Gas. ...read more.

This is illustrated in the diagram as follows: A Shift to the left in terms of quantity and demand for electricity and gas Harry Wallop's report (Wallop, 2008) suggests that environmental factors have an influence in the effect of the increase of gas and electricity costs on the supply and demand curve. Weather has a big impact on these utility costs. For instance, the demand for gas and electricity in the winter season exceeds the demand for gas and electricity in the summer season. Therefore gas and electricity costs are higher during this period. Property owners in the lower distribution are forced to come up with the financial resources to be able to afford the utility costs during winter. They may have to see this as an opportunity cost. Warmth in shelters is essential for survival. Utility companies take advantage of this as a result. We are limited to spend a certain amount. Thus we must sacrifice having less of something to be able to afford extra heating, for instance, saving money by using less electricity for more central heating in our homes. ...read more.