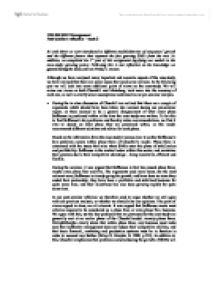 In week three we were introduced to different models/theories of companies’ growth and the different factors that separate the fast growing SMEs from the rest. In addition, we completed the 1st part of this assignment (applying two models to the case-study; growing pains). Following this is our reflection on the knowledge we gained during the discussion on Friday’s session.

Although we have analysed many important and accurate aspects of the case study, we have realised that there are some issues that need some revision. In the following part we will look into some additional point of views on the case-study. We will revise our views on both Churchill and Mintzberg, look more into the accuracy of each one, as well as clarify some assumptions mentioned in our pre-seminar analysis.

Based on the information from the case-study it seems clear to us that Softhouse’s key problems occurs within phase three of Churchill’s model. Phase three is concerned with the issues that arise when SMEs enter the phase of stabilization and profitability. Softhouse is the market leader within this sector, and maintains their position due to their competitive advantage – being innovative, efficient and flexible.

During the seminar, it was argued that Softhouse in fact has passed phase three, maybe even phase four and five. The arguments used were many, yet the most relevant were; Softhouse is already going for growth, and have done so since they ended their partnership, they have been a profitable and stabilized business for quite some time, and their client-base has also been growing rapidly for quite some time.

In our post-seminar reflexion we therefore need to argue whether we still agree with our previous analysis, or whether we should alter our opinions. The point of views argued in class, are all relevant. It was argued that Softhouse meets most criterias required to be considered as a phase four, or even phase five, business. We agree with this, yet the key problems that are portrayed by the case-study are generally met at an earlier phase of the Churchill-model, namely phase three. Birley&Muzyka clearly states that within phase three, any business must make sure that ineffective management does not reduce their competitive abilities, and that basic financial, marketing and production systems must be in function in order to succeed any further (Birley S. Muzyka D. 2000, p.253). In addition to this, Churchill emphasizes that problems occurred during the growth of SMEs will need to be solved and managed before being able to enter the next phases of the model (Birley S. Muzyka D. 2000, p.253).

In conlusion, it is apparent that we still share the same point of views that we did in our pre-seminar analysis; we believe the key problems faced by Softhouse occur in phase three of the model applied. Nevertheless, we also agree with the new judgments brought forward in class, and we understand the importance of being critical to our own views. More importantly however, we have learnt that these models may never entirely fit with the real world, and we now grasp the importance of being able to criticise our sources and their relevance to the topic matter (see next section).

We learned that the key problems faced by Softhouse were not external but internal, and due to their “external success” the company was still able to grow. But in order to continue growing further they need to deal with the internal problems before it start to affect their customers and growth.

We will now look further into some of the internal problems that came up during the Friday-session. Firstly, the importance of a good relationship with the customer and the issue Softhouse had with the technology and the level of difficulty is important. The technology was not as user-friendly as the customer needed it to be. This was something that they need to improve in order to maintain good customer relationship. They will also need to improve their services like their web-based services in order to build a better relationship with their foreign customers and also attracting new foreign customers through making the services more accessible at all hours on the web.

The need for an HR department was something that we agreed on. The HR department should provide sufficient management training as well as create a system of rewards in order to increase the motivation of the employees. There should be possibilities of career development in order to attract the most qualified people to work at Softhouse. The HR department also need a new recruitment system. At this stage they are employing young people without much experience and often just through people in the company. They need get a recruitment system in place and to start looking at other ways to recruit qualified people and possibly start an organized training program to train graduated in their company.

As previously mentioned in our last analysis, they need to hire a director with sufficient management training in order to implement the new organisational changes. There need to be a clear difference between managers and directors.

As a conclusion of this part of reflection we now understand the importance of being critical to theories. It is important to elaborate different models when it comes to purpose of use and accuracy.