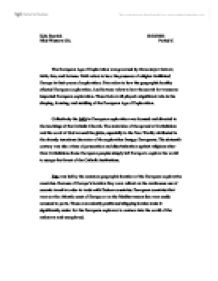 The European Age of Exploration was governed by three major factors; faith, fate, and fortune.

Because of Europe's location they were reliant on the continuous use of oceanic travel in order to trade with Eastern countries. European countries that were on the Atlantic coast of Europe or on the Mediterranean Sea were easily accessed to ports. These conveniently positioned shipping locales made it significantly easier for the European explorers to venture into the world of the unknown and unexplored. Fortune was a great incentive for the Europeans to explore the globe, as they say; money makes the world go 'round. In the sixteenth century much of the European explorers' goals for fortune leaned on a doctrine called; Mercantilism. ...read more.

Europe took slaves from Africa and brought them to the New World in exchange for goods. The goods were then brought back to Europe to make new goods and to make a profit. This created a triangular shape in the Atlantic Ocean, thus giving the route its name. This was played a huge role in the generation of fortune in sixteenth century Europe. The European Age of Exploration was dominated by three key dynamics; faith, fate, and fortune. Catholicism headed the Europeans in their faith, Europe's oceanic location commanded their fate, and it was the doctrine of Mercantilism that regulated their fortune. The European Age of Exploration was shaped, molded, and formed thanks to these three dynamics. ...read more.