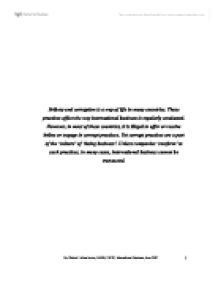 The extent to which corrupt practices is perceived among businesses in different cultures and the code of ethics applied to justified such practices when reasonable.

Bribery and corruption is a way of life in many countries. These practices affect the way international business is regularly conducted. However, in most of these countries, it is illegal to offer or receive bribes or engage in corrupt practices. Yet corrupt practices are a part of the 'culture' of 'doing business'. Unless companies 'conform' to such practices, in many cases, international business cannot be transacted. The extent to which corrupt practices is perceived among businesses in different cultures and the code of ethics applied to justified such practices when reasonable. International Business is all commercial transactions - private and governmental - between two or more countries (Daniels & Radebaugh, 2004). When dealing with these transactions internationally culture is a major factor, which influence on the way business is perceived from both parts. In some countries, compliments in the form of cash, gifts, entertainment, or any other form of acknowledgment of a good business deal can be seen as bribes. They may find bribery and corruption as common practices in some countries. However, at what extent can small gifts be seen as a persuasion to influence decisions in order to benefit the interests of the donating party? A person may find morally incorrect to accept any kind of incentive, which can lead to the concept of bribery. A bribe is remuneration for the performance of an act that is inconsistent with the work contract or the nature of the work one has been hired to perform (Shaw & Barry, 2001). ...read more.

In discordance to Kant the fact that an action can be said as right or wrong will be dependant to the entitlement that rules created provides. In the other hand, Kant's approach remains that an action is wrong because is reasonably wrong and not because God or any Law has imposed to societies to be said wrong and finally that duties should be conducted regardless. Further, Kant's concept is also exemplified by atheists who see morality as part of common sense and are not guided by any other influences apart from what it is reasonably acceptable in societies. Cases of bribery and corruption usually occur between two countries that maintain very a very close relationship in the area of business dealt. This relationship induces the practice or bribery in large scale. In a different concept of good practices in ethics David Hume postulated the Agent, Receiver, and Spectator in Moral Sense Theories. Moral agents are the entities who perform a immoral action, such as offering bribes, the receiver are potential business competitors affected by those bribes and the spectator is the person or entity who witnesses the acts of bribery (David Hume (1711-1776), Moral Theory). Hypothetically, a case of bribery can be demonstrated as follow: Pegasus is a corporation, which provides fast communication through circuits, computer peripherals and other means of media. Pegasus International Inc sees China as a growing fast market and identifies the lack of wireless communications in this country. ...read more.

A good deal between two major companies from different countries or region upon the acceptance of bribery will definitely promote system of monopolies between favourable companies and subsequently the creation of Cartel. In conclusions the conduction of bribes in foreign corporations could put out of business firms, which have laws stopping them from accepting bribes (ethics ignored). The non- participation in bribes can lead companies in a position being left out in the international trade which can result the loss of billions a year in income. However, the money made through the system of corruption are normally never taxed and therefore, not accounted as an indicative of a nation's wealth by the end of a financial year. The 1977 Foreign Corrupt Practices Act FCPA invigilates the US for any practices considered as form of bribes. In the history of the U.S. trading, companies used to pay off foreign officials for business favours. Since then the practice became a crime. An average of $300 million were paid to officials and the money were may have certainly be invested overseas, (Shaw & Barry, 2001).. In short, the main issue for accepting unregistered cash is that a country loses out with financial contributions that never are reinvested in the country where the money came from. International institutions must act in a way to enforce the authentication of transactions through the supervision of reliable entities. Business ethnics can only be achieved if each individual regulates common sense, not because it is said to be right to pursue the decision but because the solution will promote a reasonable good effect in everyone. ...read more.