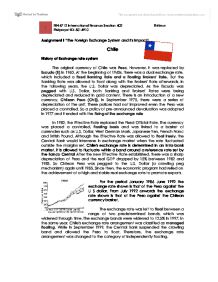 The Foreign Exchange System and its Impact on the Countries of Latin America.

Assignment I "The Foreign Exchange System and its Impact" Chile History of Exchange rate system The original currency of Chile was Peso. However, it was replaced by Escudo (E) in 1960. At the beginning of 1960s, there was a dual exchange rate, which included a fixed Banking Rate and a floating Brokers' Rate. But the Banking Rate was allowed to float along with the Brokers' Rate afterwards. In the following years, the U.S. Dollar was depreciated. As the Escudo was pegged with U.S. Dollar, both Banking and Brokers' Rates were being depreciated and reduced in gold content. There is an introduction of a new currency, Chilean Peso (Ch$), in September 1975, there were a series of depreciation of the unit. These polices had not improved even the Peso was placed a controlled. So a policy of pre-announced devaluation was adopted in 1977 and it ended with the fixing of the exchange rate In 1982, the Effective Rate replaced the Fixed Official Rate. The currency was placed a controlled, floating basis and was linked to a basket of currencies such as U.S. Dollar, West German Mark, Japanese Yen, French Franc and British Pound. Although the Effective Rate was allowed to float freely, the Central Bank would intervene in exchange market when the rate fluctuated outside the margins set. Chile's exchange rate is determined in an intra-bank market. It is allowed to fluctuate within a band around a reference rate set by the Banco Central After the new Effective Rate established, there was a sharp depreciation of Peso and the real GDP dropped by 15% between 1982 and 1983. So Chilean Peso was pegged to the U.S. Dollar (a crawling peg mechanism) again until 1985. Since then, the economic program had relied on the achievement of a high and stable real exchange rate to promote exports. For the period January 1986 June 1992 the exchange rate shown is that of the Peso against the U S dollar. ...read more.

Some have argued, for example, that Australia came through the 1997-98 Asian crisis in relatively good shape because its currency was free to depreciate automatically in response to the deterioration of its export markets. Canada and New Zealand, like Australia, are said to be commodity-exporting countries with floating currencies that automatically depreciate when the world market for their export commodities is weak. Again, this mechanism is normally lost under a rigid nominal anchor. 3. The pegging problem still more difficult. If a country has rigidly linked its monetary policy to some nominal anchor, exogenous fluctuations in that anchor will create gratuitous fluctuations in the country's monetary conditions that may not be positively correlated with the needs of that particular economy. Argentina Argentina is one of the countries which it cannot neglect the inflation and currency crisis when discussing its historical exchange rate regime. Since mid 1960s, Argentina has adopted 6 programs aimed at stabilizing domestic prices. Fixed exchange rate was used as an anchor in these programs, in the belief that with fixed exchange rates domestic inflation would recover quickly to world level. These programs somewhat tamed the inflation at the beginning. However, the pressures of external debts, decreases in the export price, and speculative attacks always led to failures of these programs. When a program failed, the government always abolished the fixed exchange rate regime, or devalued the Argentine currency, or set a two-tier exchange market which allowed the exchange rate for financial payments to float. Changing the domestic currency was also a measure in these programs. For example, from June 1985 to January 1992, also as a part of the price control program, Argentina had once replaced the circulating Peso with a currency named Austral. The most recent currency crisis Argentina has met was triggered by its default on a US$132 billion loan payment. Before that, Argentina had been fixing its Peso to the U.S. ...read more.

Moreover, in the few emerging nations where the Central Bank is independent, exchange rate policy is determined by the politically appointed minister of finance. A particularly attractive feature of super-fixed regimes is that, in principle, by reducing speculation and devaluation risk, domestic interest rates will be lower and more stable than under alternative regimes which a lower exchange risk is translated into a lower country risk premium. Next, fiscal solvency. In the stronger version of super-fixed models this is taken care-of almost automatically, as the authorities understand that they have no alternative but to run a sustainable fiscal policy. This is because the authorities are aware that the traditional recourse of reducing the real value of the public debt through a surprised devaluation is not any longer available. This imposed fiscal responsibility is, in fact, considered to be one of the most positive aspects of the super-fixed regime. However, the fiscal requirement has to go beyond solvency, and has to include specific operational aspects. In particular, the country in question has to develop an institutional setup that allows it to run counter-cyclical fiscal policies. Exchange rate system over the past six months period in Mexico American Dollars to 1 MXN (invert,data) 120 days latest (Jul 12) 0.0783024 lowest (May 25) 0.0753125 highest (Apr 26) 0.0823655 Mexican Pesos to 1 USD (invert,data) 120 days latest (Jul 12) 12.771 lowest (Apr 26) 12.141 highest (May 25) 13.278 Mexican peso is quite fluctuate during past 6 months, and appreciate during past 4 month from January to April 2010 and depreciate from May to Jun 2010. However, comparing in January with June, Mexican peso has depreciated from 12.8543 Mexican peso to around 12.275 Mexican peso per dollar in April 22. This will effect the economic in Mexico country which when the currency faces appreciation that there will be an increase in expected inflation rate because the consumers with in Mexico perceive the price of foreign country low. Therefore, they will buy foreign products and need more foreign currency then the Mexican currency will be depreciate at last. ...read more.