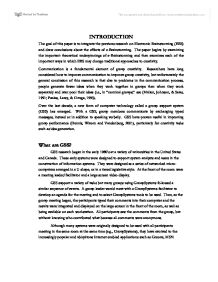 The goal of this paper is to integrate the previous research on Electronic Brainstorming (EBS) and draw conclusions about the effects of e-Brainstorming.

INTRODUCTION The goal of this paper is to integrate the previous research on Electronic Brainstorming (EBS) and draw conclusions about the effects of e-Brainstorming. The paper begins by examining the important theoretical underpinnings of e-Brainstorming and then examines each of the important ways in which EBS may change traditional approaches to creativity. Communication is a fundamental element of group creativity. Researchers have long considered how to improve communication to improve group creativity, but unfortunately the general conclusion of this research is that due to problems in the communication process, people generate fewer ideas when they work together in groups than when they work separately and later pool their ideas (i.e., in "nominal groups;" see (Mullen, Johnson, & Salas, 1991; Paulus, Larey, & Ortega, 1995). Over the last decade, a new form of computer technology called a group support system (GSS) has emerged. With a GSS, group members communicate by exchanging typed messages, instead or in addition to speaking verbally. GSS have proven useful in improving group performance (Dennis, Wixom and Vandenberg, 2001), particularly for creativity tasks such as idea generation. What are GSS? GSS research began in the early 1980's at a variety of universities in the United States and Canada. These early systems were designed to support system analysts and users in the construction of information systems. They were designed as a series of networked micro-computers arranged in a U shape, or in a tiered legislative style. At the front of the room were a meeting leader/facilitator and a large screen video display. GSS support a variety of tasks but many groups using GroupSystems followed a similar sequence of events. A group leader would meet with a GroupSystems facilitator to develop an agenda for the meeting and to select GroupSystems tools to be used. Then, as the group meeting began, the participants typed their comments into their computer and the results were integrated and displayed on the large-screen in the front of the room, as well as being available on each workstation. ...read more.

Although the original GSS were room-based, the rise of the net-enabled organization and the Internet has enabled the formation of groups that were not conceivable thirty years ago. GSS enable groups to form and operate without ever experiencing face-to-face communication. These so-called "virtual teams" (Lipnack & Stamps, 1997) have been the focus of extensive research (for a review of recent work see Saunders, 2000). Additionally, GSS avoid the communication problems associated with peer evaluation (Camacho & Paulus, 1995) by allowing anonymous involvement of participants. With anonymous participation, group members are able to evaluate communication without regard to the source. Another benefit is that GSS support parallelism or multiple simultaneous communication processes. This eliminates the competition for speaking time that burdens interactive groups (Diehl & Stroebe, 1991). Because GSS are enabled by networked computers they support the automatic storage of all communications. All communications that occur during the group session are automatically recorded by the computer for later review and analysis. IMPLICATIONS AND CONCLUSIONS We believe that the use of electronic brainstorming can play a key role in enhancing group creativity, particularly for larger groups that suffer from the process losses inherent in verbally interacting groups. Several conclusions can be drawn from EBS research. First, it is clear that EBS and GSS can improve group creativity in certain situations. The advantages of synergy and social facilitation as well as the ability to bridge time and space make GSS an invaluable tool for many groups. We recommend that large groups seeking to generate ideas choose first to work together using electronic brainstorming, either in special-purpose meeting rooms equipped with computers or over the Internet using Web-based brainstorming tools or simply electronic mail. For smaller groups, the use of nominal groups or their organizational cousin (Nominal Group Technique: (Delbecq, Van de Ven, & Gustafson, 1975; Van de Ven & Delbecq, 1971) still seems appropriate. However, given the ubiquitous use of computing technology in modern organizations, most nominal groups will most likely use computer-based tools to record ideas thus making the sharing of ideas very simple using electronic brainstorming tools or electronic mail. ...read more.