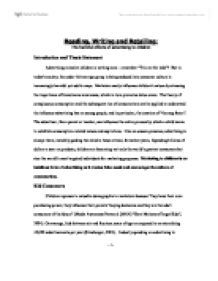 The harmful effects of advertising to children Introduction and Thesis Statement Advertising aimed at children is nothing new - remember &quot;Trix are for kids&quot;?

Reading, Writing and Retailing: The harmful effects of advertising to children Introduction and Thesis Statement Advertising aimed at children is nothing new-remember "Trix are for kids"? But in today's society, the under-thirteen age group is being seduced into consumer culture in increasingly harmful yet subtle ways. Marketers easily influence children's values by stressing the importance of brand name awareness, which in turn promotes status craze. The theory of conspicuous consumption and the subsequent rise of consumerism can be applied to understand the influence advertising has on young people, and in particular, the creation of "the nag factor". The advertiser, like a parent or teacher, can influence the entire process by which a child learns to establish consumption-related values and aspirations. Like an unseen presence, advertising is always there, invisibly guiding the child in these critical, formative years. Spending billions of dollars a year on products, children are becoming not only the world's greatest consumers but also the world's most targeted individuals for marketing purposes. Marketing to children is an insidious form of advertising as it creates false needs and encourages the culture of consumerism. Kid Consumers Children represent a valuable demographic to marketers because "they have their own purchasing power, they influence their parents' buying decisions and they are the adult consumers of the future" (Media Awareness Network [MAN] "How Marketers Target Kids", 2004). On average, kids between six and fourteen years of age are exposed to an astonishing 40,000 advertisements per year (Strasburger, 2001). Industry spending on advertising to children has increased from $100 million in 1990 to over $2 billion in 2000 (MAN, "How Marketers Target Kids", 2004). This is money well spent in the eyes of the company owners. Each year, Canadian children aged six to eight spend $100 million of their own money, while nine to fourteen year olds spend $1.7 billion. Along with that, those age groups influence almost $15 billion in family purchases each year, from food and toothpaste to cars and cellphones (Reich, 2003). ...read more.

Kid's consumer culture "takes an intimate thing-the realization and expression of self-and fuses it with a distant system-the production of goods, services and media in an impersonal market" (Cook, 2001). Since advertising creates and sustains an ideology of consumption, it is a social force that must be analyzed for impact and influence. Consumerism encourages a cult of individualism by focusing on the needs-real or artificial-of the consumer and, in doing so, diverts attention from larger societal concerns. For instance, physical fitness levels are declining as child obesity rates soar. "Boys are sacrificing social skills and school scores in pursuit of manual dexterity with the latest PlayStation, and girls are struggling with the contrast between the fashion industry's definition of beauty and their reflections in the mirror" (Graydon, 2003). Children's culture has become virtually indistinguishable from consumer culture over the course of the last century (Cook, 2001). The cultural marketplace is now an important place for "the formation of the sense of self and of peer relationships, so much so that parents often are stuck between giving into a kid's purchase demands or risking their child becoming an outcast on the playground" (Cook, 2001). Advertisers are fully aware of this and infuse their pitches with messages that prey upon the emotional weaknesses and insecurities of children (Ruskin, 1999). In Ruskin's article, he interviews Nancy Shalek who is the president of an advertising company. She admits that: Advertising at its best is making people feel that without their product, you're a loser. Kids are very sensitive to that. If you tell them to buy something, they are resistant. But if you tell them that they'll be a dork if they don't, you've got their attention. You open up emotional vulnerabilities, and it's very easy to do with kids because they're emotionally vulnerable (1999). Advertising encourages children to overvalue the material world. It sells the belief that happiness lies in possessing and consuming material goods. ...read more.

Parents also play a large part in helping their children become media-aware. Parents should talk to their kids about consumerism and encourage them to challenge advertisers' claims about their products. They should spend more time with children, not money for consumer goods. Children should be educated about global consumption, and how the world's resources are distributed very unevenly among the world's population. Above all, children should be taught that happiness, health and self esteem cannot be purchased at a store. Summary It is clear to see that advertising can and does affect children in harmful ways. They learn from what they watch on television, in movies, in video games, and in music videos. However, they are unable to comprehend the insidious tactics employed by marketers. They are sought after by advertisers because of their influence over their parents' money, their willingness to spend their own, and their na�vete about consumer culture. In today's society, children are walking around with images of beautiful homes, designer clothes, electronic gadgets, unlimited toys and fun foods in their minds. However, many of the ideals, dreams and aspirations linked to the sale and advertising of products, contradict the social definition of need as was once understood. When so much of the world is still without electricity or clean drinking water, how important is it to have a DVD player in a minivan so that kids can be entertained on the road? Conclusion and Further Discussion Like Veblen's theory of conspicuous consumption, much of society is being transformed into the leisure class, where the main idea is to consume and be seen consuming. Ultimately, it is only through education and support from family, teachers and the government, that children will be protected from unhealthy media influences. For further research, both child and family variables could be examined. For example, one could analyze how gender and socioeconomic status affect the relation between advertising exposure, consumerism, and parent-child conflict. The responsibility of governments and the accountability of the media industry itself should also be examined. ...read more.