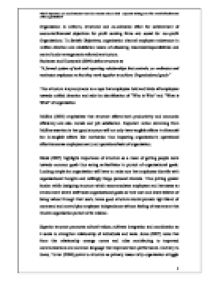 The Importance of Business Organisation and Structure.

Organisation is uniform, structured and co-ordinated effort for achievement of economic/financial objectives for profit seeking firms and social for non-profit Organisations. To Satisfy Objectives, organisation channel employee endeavours in unified direction and establishes means of allocating resources/responsibilities and control under arrangements referred as structure. Buchanan and Huczynski (2004) define structure as "A formal system of task and reporting relationships that controls, co-ordinates and motivates employees so that they work together to achieve Organisational goals" Thus structure is synonymous to a rope that employees hold and binds all employees towards unified direction and aids the identification of "Who is Who" and "What is What" of organisation. Mullins (2005) emphasizes that structure affects both productivity and economic efficiency and also morale and job satisfaction. Important notion stemming from Mullins assertion is that good structure will not only have tangible effects i-e financial but in-tangible affects like motivation thus impacting organisation's operational effectiveness as employees carry out operations/tasks of organisation. Bloisi (2007) highlights importance of structure as a mean of getting people work towards common goals thus acting as facilitator in pursuit of organisational goals. Looking simple but organization will have to make sure that employees identify with organisational thoughts and willingly forgo personal interests. Thus putting greater burden while designing structure which accommodates employees and harnesses an environment where staff takes organisational goals as their own and share believe of being valued through their work, hence good structure should provide right blend of command and control plus employee independence without feeling of resentment that hinders organisation pursuit of its mission. Superior structure promotes cultural values; cultivate integration and coordination as it seeks to strengthen relationship of individuals and tasks. Jones (2007) notes that from this relationship emerge norms and rules contributing to improved communications and common language that improves team performance. ...read more.

Structure can be divided into various types. First Functional Structure, according to Jones (2007) it groups people together on basis of their common expertise and experience or because they use same resources thus expertise and use of same resources can result in high quality products at competitive prices. Plus it offers employees a chance to learn from each other and become more specialised and productive thus helping organisation spend less on training and endorse development of norms, values, and group cohesiveness that promote high performance which helps in building loyalty and commitment thus contributing to organisational efficiency. Baxter (2007) points to practical contribution functional structure can make in successfully diminishing risk, through looking at fundamental issues about how business runs profitably, assessing who does what and ensuring they are skilled or experienced for the job. Doing this, business will get most appropriate people who undertake activities for which they have skills, improving skills where needed, and empowering staff to understand responsibilities attached to each role. According to Campbell et al (2005) Functional structures are employed by organisations based on single site, disadvantages arise when organisation grows in size and complexity resulting in co-ordinating and control problems between different functions meaning that different functions might develop their own targets and fail to integrate individual and corporate goals. An obstacle to organisational effectiveness identified by Jones (2007) is measurement problems associated with functional structures, since it's difficult to associate "Functional costs" with individual products, or contribution of each function to overall product profitability making it difficult to reward on positive recognition. Moving to divisional structure, According to Jones (2007) it can solve control and co-ordination problems associated with production of different kinds of products at different locations for different types of customers. ...read more.

problems plus a long hierarchy with high number of senior positions will certainly have its effect on productivity as it will make decision making process slow. Mullins (2005) criticizes structure as not being able to describe what really happens in organisation. Individuals differs and they bring their own believes and values to jobs. Thus the way structure is designed affects the way people behave within organization. Once an organization decides how it wants members to behave, the attitudes it wants to encourage, and what it wants its members to accomplish, it can structure and encourage development of cultural values and norms to obtain these desired attitudes, behaviours, and goals. Conclusion Structure serves as basis for orchestrating organisational activities. Organisations shall understand importance of structure in carrying out business operations and its relation to strategy. Above discussion shows that relationship between the two is evolutionary and is affected by change in organisation over the years, as chandler believed strategy affected structure and carried his study in 1960, Mintzberg in late 70's said structure can have its affect on strategy. Designing structure that fits company needs is a major challenge. Each structure has its advantages and disadvantages on how it contributes to its effectiveness, and organisation has to mull over the decision on what structures it follows, plus the autonomy organisations provide to its employees for purpose of decision making. Organisation can choose from variety of structure like, functional, divisional, project teams, holding companies and matrix structure. Failure to choose an effective structure has it consequences on organisation as it will not only affect health of the organisation it will also affect employees loyalty, motivation at work and job satisfaction, thus organisation when deciding for designing structure needs to take care of all aspects that relates to people and working of organisation. ...read more.