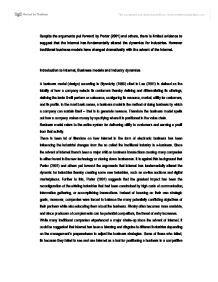 The internet has fundamentally altered the dynamics for industries

Despite the arguments put forward by Porter (2001) and others, there is limited evidence to suggest that the internet has fundamentally altered the dynamics for industries. However traditional business models have changed dramatically with the advent of the internet. Introduction to Internet, Business models and Industry dynamics A business model (design) according to Slywotzky (1996) cited in Lee (2001) is defined as the totality of how a company selects its customers thereby defining and differentiating its offerings, defining the tasks it will perform or outsource, configuring its resource, market, utility for customers, and its profits. In the most basic sense, a business model is the method of doing business by which a company can sustain itself -- that is to generate revenue. Therefore the business model spells out how a company makes money by specifying where it is positioned in the value chain. Business model refers to the entire system for delivering utility to customers and earning a profit from that activity. There is been lot of literature on how internet in the form of electronic business has been influencing the industrial changes from the so called the traditional industry to e-business. Since the advent of internet there's been a major shift on business transactions causing many companies to either invest in the new technology or closing down businesses. It is against this background that Porter (2001) and others put forward the arguments that internet has fundamentally altered the dynamic for industries thereby creating some new industries, such as on-line auctions and digital marketplaces. ...read more.

Porter (2001) urges that whether an industry is new or old, its structural attractiveness is determined by five underlying forces of competition: the intensity of rivalry among existing competitors, the barriers to entry for new competitors, the threat of substitute products or services, the bargaining power of suppliers, and the bargaining power of buyers. In combination, these forces determine how the economic value created by any product, service, technology, or way of competing is divided between, on the one hand, companies in an industry and, on the other, customers, suppliers, distributors, substitutes, and potential new entrants. The alteration of the dynamics of traditional industry requires entrepreneurs to use the model to identify competition, make a plan, and implement the process. By using the five forces model it is clear that internet and IT has made it possible to both focus on the top and bottom lines and market share is expanded and costs are cut. Many products and services exist just online, many of the traditional companies have also gone online taking advantage of internet use. While internet has opened avenues of competition to existing companies it has also created opportunities for start ups. Now businesses can enter the market on-line with few barriers to entry. The Porter's Five Forces Model below will further be used to illustrate on how internet impacted the five forces. Porter (2001) (a) Competitive Rivalry (-) Reduces differences among competitors as offerings are difficult to keep proprietary (-) Migrates competition to price (-) Widens the geographic market, increasing the number of competitors (-) ...read more.

The change of business model has been enhancing businesses' value proposition, value network, partners, and efficiency in reaching the customer. However it must be noted that today's business landscape is characterized by the intense use of ICT (e.g. for e-business), fierce global competition, rapid change and results in increasing complexity, high risk and greater uncertainty than ever before. E-business can be understood as a powerful extension of the more traditional EDI that predates today's Internet and stands for the exchange of business data using an understood data format. Interpret from the theory perspective The importance of B2B is considerable as majority of businesses are nowadays large and have established supply chains and the principles of B2B e-commerce encompass supply chain management. Companies have now thorough knowledge of other company's offer with schedules to cater for its needs and requirements and are developing relationships with their suppliers to treat them as their own divisions. More collaboration has come into the system and B2B marketplaces are quite open in operation. The companies have got a new dimension for customer relations and at times think like one with the help of customer relation management program which has become an integral part of B2B. An aspect of partnering has also come up and B2B marketplaces utilise partner relationship management to serve the customer better and efficiently. For example, computer companies works with Microsoft and other anti-virus companies such as Norton to supply an integrated product to the computer user. Wide arrays of software packages are available to help e-commerce sites create unique boutiques that target specific customers. For example, American Airlines has personalized its website so that business fliers view it as a business airline and leisure travellers see it as a vacation site. ...read more.