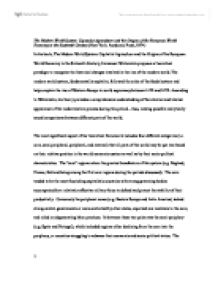 The Modern World System: Capitalist Agriculture and the Origins of the European World Economy in the Sixteenth Century (New York: Academic Press, 1974)

Regions shifted towards and away from the core throughout the centuries of change and development in the modern world economy. Wallerstein divides the history of the capitalist world system into four stages. The first two deal with the periods between 1450-1670. It describes the elements that European countries took to emerge as economic powers in the world, and the embryonic stages of the world economy. The third and fourth stages concentrate on the period starting with the 18th century onward, where a shift was made from agriculture capitalism to industrial capitalism. The capitalist world economy, as envisaged by Wallerstein, is a vibrant system which changes over time. However, certain crucial features remain in place. Perhaps the most significant is the fact that the core regions of northwestern Europe benefited most from the system, clearly over other areas. Through extremely high profits gained from international trade and from an exchange of manufactured goods for raw materials from the periphery, the core enriched itself at the expense of the peripheral economies. ...read more.

It appears that his theory has been modified by individuals like Chirot and Stavrianos, and most probably by others. No doubt others have refuted this argument as being an oversimplified explanation based on narrow factors. At the risk of sounding dated, I think his model has merit. For the period he is discussing, one cannot avoid the rise of the northwest European rise to power, and the spread of colonialism and imperialism as being amongst the most significant factors in molding an "international community". However, in light of a world history, much like other attempts, it falls short at presenting an adequate model for studying areas preceding this period or those areas categorized as "external". His exclusion of culture and religion further impede his model as an effective means to approach world history. Nonetheless, I find his arguments clear and comprehensible. Although I do not agree with his proposed outlook, I do find it as a "must read" for anyone studying modern world history. 1 ...read more.