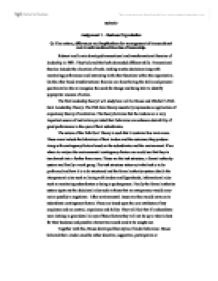 The nature, differences and implications for management of transactional and transformational theories of leadership.

Assignment 1 - Business Organisation Q: The nature, differences and implications for management of transactional and transformational theories of leadership. Kuhnert and Lewis developed transactional and transformational theories of leadership in 1987. They believed that both demanded different skills. Transactional theories include the allocation of work, making routine decisions along with monitoring performance and interacting with other functions within the organisation. On the other hand, transformational theories are about having the skills and personal qualities to be able to recognise the need for change and being able to identify appropriate courses of action. The first leadership theory I will study here will be House and Mitchell's Path Goal Leadership Theory. The Path Goal theory essentially represents an application of expectancy theory of motivation. The theory believes that the leaders are a very important source of motivation provided their behaviour can enhance desirability of good performance in the eyes of their subordinates. The nature of the Path Goal Theory is such that it contains four main areas. ...read more.

On the other hand the leader could be of a participative nature where they would seek opinions and suggestions from the subordinates in a delegation style approach before decisions would be finalised. Equally it is possible for the manager or leader to be more achievement orientated where they would set out the primary aim of setting tasks and goals that would be very challenging for the subordinates concerned that could see them under a lot more pressure than they where previously under. The path-goal contingency leadership theory holds promise for improving our understanding of how a channel leader's behaviour affects other channel members. In a recent article by Barnett and Arnold it provides a justification of path-goal theory's relevance to the marketing channel, and describe an application of the theory within a channels context. The purpose of this study is to report experimental results of an exploratory investigation of path-goal theory in a marketing channels environment. ...read more.

If a leader was to somehow change their style then conflicts, confusion or lower morale may occur which would no doubt result in a decrease in productivity for the organization concerned. What is important however is that the outcomes are of almost paramount importance. These generally result in total satisfaction of the job, good performance from all, everyone working towards the one goal and finally good motivation levels showing a willingness to work and putting the organization first. Overall we realize that there is many leadership styles and theories that many people have interpreted in there own ways and what they believe will happen. What is important for us to notice is that Vroom's model is focused primarily for decision-making whereas House's Path Goal Theory is an application of expectancy theory for motivation. One extra key difference is that Vroom model is based on an analysis of how a leaders decision affects its quality and acceptance by subordinates where House links to the subordinates by the leaders behavior. To be successful House has to get leaders to clarify and help subordinates all the way. WORD COUNT: 1046 06/05/07 ...read more.