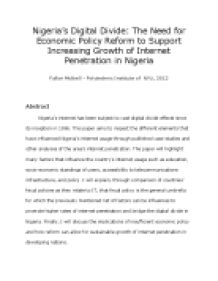 ﻿Nigeria?s Digital Divide: The Need for Economic Policy Reform to Support Increasing Growth of Internet Penetration in Nigeria Fallon McNeill - Polytechnic Institute of NYU, 2012 Abstract Nigeria?s internet has been subject to vast digital divide effects since its inception in 1996. This paper aims to inspect the different elements that have influenced Nigeria?s internet usage through published case studies and other analyses of the area?s internet penetration. The paper will highlight many factors that influence the country?s internet usage such as education, socio-economic standings of users, accessibility to telecommunications infrastructure, and policy. I will explain, through comparison of countries? fiscal policies as they relate to IT, that fiscal policy is the general umbrella for which the previously mentioned list of factors can be influences to promote higher rates of internet penetration and bridge the digital divide in Nigeria. Finally, I will discuss the implications of insufficient economic policy and how reform can allow for sustainable growth of internet penetration in developing nations. Introduction Digital Divide According to a 2011 Reuters article, Funke Opeke of Main One Cable Company predicts that one-third of Nigeria?s population ?could have direct internet access by 2013? (pg. 1). With such rapid expected growth, it makes you wonder why the developing country is so far behind more developed nations like the United States which has an internet penetration rate of 78.1%. Nigeria?s internet penetration is currently at a mere 28.4% (InternetWorldStats). The existence of digital divide in Nigeria has stifled the country?s ability to connect to the internet and allow Nigerians access to information. The digital divide is a term used to describe the gap between those who have access to the internet and those who do not. Moreover, it typically reflects the gap in economic standing and support. For years, Nigerians have been subject to the impacts of the digital divide. While there are multiple influencing factors on the intensity of digital divide effects, this paper aims to create a strong platform reflecting the importance of policy, above all, and the need for reform. ...read more.

16-17). Thus, economic policy provides the answer. If the Nigerian government can reform its economic policy to digress from the monopolized culture of its information sector and towards a capitalized, competitive market, Nigerians could have a better chance to harness the benefits of internet penetration. The World Bank (2002) also emphasizes policy reform as a factor that has the ability to facilitate the most growth in internet penetration in developing nations. This includes a competitive industry and regulatory framework (pg. 17). In addition, a study suggests that economic policy change in Africa ?could double the number of [telephone] lines per capita? by privatizing the market, which increases competition, and employing good regulation practices (as cited pg. 24). Thus, providing an adequate economic policy will increase the accessibility of the internet throughout countries like Nigeria. And although Adeya and Oyelaran-Oyeyinka (2004) emphasize the importance of socio-economic factors mentioned previously, they also acknowledge the significance of economic policy and its effects on those factors. From an empirical analysis of African countries and respective internet penetration, they note there is certainly a ?correlation of wealth and Internet diffusion? (pg. 72). The authors also mention that the internet-rich countries like the US have been supported by federal and state policies (pg. 81). The correlation between wealth and internet penetration refers to the income level at the individual, organizational and national scales. Hence, there is an extreme need for economic policy to afford opportunities for increased income levels across the board. At the individual level, low income means average Nigerians cannot afford to pay for the equipment and internet subscription fees. At the organization level, institutions, programs and companies that would like to offer internet services will not be able to due to such high ISP subscription fees and telephone costs without sufficient disposable income. And on a national scale, if a country cannot even provide reliable utilities to each citizen, it will most definitely not be able to afford the investment in the simplest internet infrastructure. (pgs. 79-80). ...read more.

If implemented correctly, reforming the economic policy in Nigeria can help suppress the effects of digital divide and ultimately lead to a more prosperous economy and better quality of life for its citizens. Discussion As I stated earlier in this paper, I use the term ?economic policy? as an umbrella term that affects all the issues aforementioned. Economic policy is the influencing factor on nearly every operation of a country. In Nigeria?s case, much of the country?s early internet history has been stifled by cultural conflict and poor economic standing. With a more peaceful state and economic growth on the horizon, Nigerian policy makers should focus on reform. Economic policy needs to address the needs of capitalism. Policy reform must also address the GDP and Nigeria?s type of economy. Heavily relying on the oil trade will ultimately stymie the country as other nations will grow and develop by means of information and internet technologies. In the coming age, Nigeria is expected to develop into a higher income country (Weisenthal, 2011) and many of the new changes and challenges will be foreign to them. The new democratic model of government should help them transition more smoothly into a more electronic, internet driven era. Economic policies will need to be more liberal and embrace more of a capitalist economy as opposed to the military ruling monopoly that had consumed the nation for more than thirty years. Developing nations, more than any other affected by digital divide, need to acknowledge the importance of economic policy. Like Nigeria, developing countries tend to have massive untapped potential due to poor economy, poor world ranking and lack of primary infrastructure. In order to overcome those factors, economic policy must be reformed. Infrastructure investment, job creation, educational grants, tax and tariff reform and competitive, stimulating markets must all be primary factors of such policy. The internet has already enabled other countries, like South Africa to become global competitors due to investments in IT. If developing countries follow trend, who knows what kind of technologies and global economic environments will exist in the coming decades. ...read more.