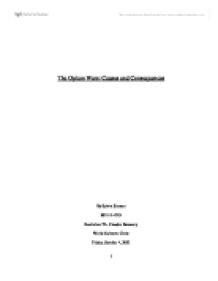 The Opium Wars - Causes and Consequences.

The Opium Wars: Causes and Consequences By Sylvia Simson 992-11-4219 Recitation TA: Claudio Benzecry World Cultures: China Friday, October 4, 2002 Nationalistic pride and an overwhelming desire for worldwide power and acclaim have always been defining characteristics of our world's major political and economical countries. China and Britain have both always been regarded as two of these instrumental nations that shape our world. However, the rivalry between these two countries, particularly in the mid-nineteenth century, stands as the foundation of what is known as the Opium Wars. The first Opium War spanned from 1839 to 1842, ending with the Treaty of Nanjing signed on August 29, 1842. The second Opium War, caused by Chinese discontent with the previously signed treaty, commenced in 1856 and concluded in 1860, and included both the Treaty of Tianjin and the Convention of Peking.1 Both of these conflicts, concerned simply with the issue of trading rights between the two countries, can be defined as a struggle for supremacy as both nations' attempted to economically and politically dominate their rival country's government system.2 However, it must also be noted that cultural differences between the two countries instigated more hindrance in each country's effort for control than anything else - the countries' contrasting belief systems, in combination with their respective historical backgrounds, is what caused ...read more.

Both the emergent concerns about the opium addiction problem and the deteriorating Chinese economy - two issues that China held Britain responsible for, as Britain was supplying the opium and, in turn, receiving an immense amount of Chinese silver as payment- were the reasons why China treated Britain with such disrespect. However, this added to the progression of sequential events that would eventually cause English resentment of China to reach its climax. In 1838, the emperor at this point in time, Emperor Daoguang, made a resolution that the trade of opium must be stopped. Nevertheless, the foreigners selling the opium ignored his rulings. Commission head Lin Zixu decided to arrest Lancelot Dent, one of the head opium traders, and when the foreign community refused to surrender Dent, Lin shut down all trade at port Canton and made it impossible for the foreigners to leave the country. After six weeks of quarreling, the foreigners gave up their opium and were allowed to leave. Commissioner Lin then destroyed all three million pounds of the drug, believing that the Qing government's method of ruling - a Confucianist regime based on "ethical leadership and firm guidance" 16- would be enough to end the confrontation with Britain. Thinking that Britain would see they were at fault, the Qing dynasty expected no kind of retaliation. ...read more.