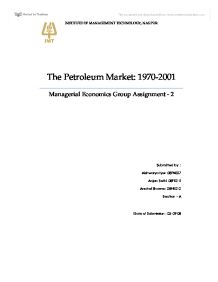 INSTITUTE OF MANAGEMENT TECHNOLOGY, NAGPUR The Petroleum Market: 1970-2001 Managerial Economics Group Assignment - 2 Submitted by : Aishwarya Iyer 08FN007 Anjan Sethi 08FT012 Anchal Sharma 08HR010 Section - A Date of Submission : 05-09-08 TABLE OF CONTENTS 1. Introduction 3 2. Events affecting the Oil market 4 3. Conclusion 8 4. References 9 Introduction Crude oil prices behave much as any other commodity with wide price swings in times of shortage or oversupply. The crude oil price cycle may extend over several years responding to changes in demand as well as OPEC and non-OPEC supply. This is evident from the tremendous changes that the world oil market has been going through in the past thirty years. In the following report, we would be identifying the events that have occurred in the past decades and analyzing how they have affected the world oil market in terms of both, prices and output. The underlying concepts used to explain the changes due to various factors affecting the oil market are the Laws of Demand & Supply. The related concept that is used in the discussion of the report is of the shifts in, and the movements along the demand & supply curves. In this regard, it should be noted that whenever the quantity demanded changes due to changes in the price of the good in question, there is movement along the curves. ...read more.

While Iranian oil production dropped from 1.5 million to 500 thousand barrels a day, Saudi Arabia also announced a significant cut in production with a ceiling of 9.5 million barrels per day. These and other events like cancellation of contracts between Iran and the US, led to a massive shortages in oil-importing nations. As a result of these shortages, the oil prices shot up to $24 per barrel, by the end of 1979. While the Iranian revolution was the proximate cause of what would be the highest prices in post-WWII history, its impact on prices would have been limited and of relatively short duration had it not been for subsequent events. Iran weakened by the revolution was invaded by Iraq in September, 1980. By November the combined production of both countries was only a million barrels per day and 6.5 million barrels per day less than a year before. As a consequence worldwide crude oil production was 10 percent lower than in 1979. The combination of the Iranian revolution and the Iraq-Iran War cause crude oil prices to more than double, increasing from $15 in 1978 to $32 per barrel by the end of 1980. The curious price fall (Mid-1980s) Curiously, by mid-1980s, the price had fallen to $11/barrel. In real terms (adjusting for inflation), this was effectively at the pre-1973 levels. ...read more.

With growing US and world economies the price continued to rise throughout 2000 to a post 1981 high. (As shown by exhibit 1) September 11 attack (2001) There was some softening in the oil market after the September 11, 2001 terrorist attack on the US causing the oil prices to fall in the $15 range (Exhibit 1). The OPEC responded by cutting back on production by 1.5 million barrels/day and was even joined by some non-OPEC nations like Russia and Norway. Mexico also announced an export cut of 100 thousand barrels/day. Conclusion From the discussion, it can be inferred that OPEC, though referred to as a cartel, has seldom been effective at controlling prices. Though OPEC continued to have mixed success in controlling prices, there were mistakes in timing of quota changes as well as the usual problems in maintaining production discipline among its member countries. Moreover, OPEC also lost power because its soaring prices shrunk demand. As judged from this case, it is quite evident that when a high price is applied, the demand side of the market responds more quickly and more vigorously than the supply side and its response lasts far longer. Thus, what should be done to keep the oil prices moving down is no secret. High energy prices can, in fact, be the most effective tool to encourage conservation and more efficient utilisation of our energy resources. ...read more.