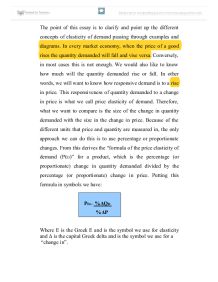 The point of this essay is to clarify and point up the different concepts of elasticity of demand passing through examples and diagrams.

= ?. Diagrammatically, this is shown by a horizontal straight line. At any price above P1 in the following figure, demand is zero. On the other hand, at P1, or any other price below, demand is 'indefinitely' large. P a b P1 D 0 Q1 Q2 Unlikely though the above demand curve may seem, it is common for an individual producer. An example of a good that has high elasticity of demand, almost indefinite, is ballpoint pens from the university bookshop or from the newsagent's shop close by. If the two shops offer pens for the same price, some people buy from the one and some from the other. Nevertheless, if the bookshop increases the price of pens, even by a small amount, while the shop close by maintains the lower price, the quantity demanded from the bookshop will fall to zero. There is also the unit elastic demand, when (PED) = 1. This is where price and quantity change in exactly the same proportion. Any rise in price will be exactly offset by a fall in quantity, leaving total consumer expenditure unchanged. ...read more.

The essay could do with more statistics, for example including example figures from diagrams in the formulae for elasticity of demand, to support the concepts of inelastic and elastic demand. The conclusion is also very short. Furthermore, the author didn't fully explain why the concepts help producers. It should be explained further that a producer can increase the price if demand is inelastic, but then this has implications in terms of customer loyalty. Moreover, how does elasticity help consumers? It's more of a concept to say how price changes alter consumers' demand, rather than a tool they can actually use.