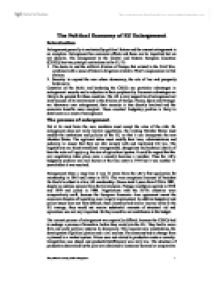 The Political Economy of EU Enlargement.

The Political Economy of EU Enlargement Introduction Enlargement generally is motivated by political factors and the current enlargement is no exception. Enlargement has economic effects and these can be important but are not decisive. The enlargement to the Central and Eastern European Countries (CEECs) has two principal motivations in the EU 15: 1. The desire to end the artificial division of Europe that existed in the Cold War, combined with a sense of historic obligation related to West's acquiescence in that division. 2. Security: to expand the area where democracy, the rule of law and prosperity holds sway. Countries on the Baltic and bordering the CEECs see particular advantages in enlargement: security and a reduction in their peripherality. Economic advantages are likely to be greatest for these countries. The UK is very supportive of enlargement not least because of its involvement in the division of Europe. France, Spain and Portugal are lukewarm over enlargement, their security is less directly involved and the economic benefits more marginal. These counties' budgetary position is likely to deteriorate as a result of enlargement. The process of enlargement Put at its most basic the new members must accept the rules of the club. So enlargement does not really involve negotiation, the existing Member States must modify the institutions and policies of the EU so that it can incorporate the new Member States. The applicant states must modify their laws, administrations and judiciary, to ensure that they are able comply with and implement EC law. The negotiations are about transitional arrangements, derogations and technical details of how the rules will apply e.g. the size of agricultural quotas. It could be argued that the real negotiation takes place once a country becomes a member. Thus the UK's budgetary problem was well known at the time entry in 1973 but it was another 11 years before it was resolved. Enlargement takes a long time it was 12 years from the UK's first application for membership in 1961 until entry in 1973. ...read more.

63403 1149 74700 30200 377100 % of EU15 19.5 0.3 19.8 8.0 100.0 Source: European Commission 2002a, 2002b CEE 8 = Czech Republic, Estonia, Hungary, Latvia, Lithuania, Poland, Slovakia and Slovenia But potential significant: * Population, AC 10 19.8% of EU 15 2002. * Rapid growth of GDP, AC10 17.0 % 2000 * Rapid growth of trade * Substantial EU surplus The trade effects of enlargement will add to demand and employment. In the CEE these effects should be significant but in the EU the short term the effects will be minor but in the long term there is the potential for substantial trade. But * Will the CEE countries be able to compete? * Will CEE growth be held back by concentration on a narrow range of low skill labour intensive industry. * Will particular industries and regions output and employment be reduced by additional imports? * Will particular countries be adversely affected? The impact on the EU cannot be that large because of the small productive capacity of the CEE see Table 1. The large and widening CEE current account deficit with the EU, does not indicate that the EU has a problem competing. A deficit is to be expected during transition when there will be a large capital inflows, it is large but is sustainable in the medium term. The CEE countries are, however, in surplus in services as a result of tourist income and transport services (Roemisch, 2000). What is becoming clear is that it is possible but not inevitable that CEE countries will be able to compete. The performance of these countries has become differentiated some countries particularly Hungary, Estonia the Czech and Slovak Republics and Poland have had some success in developing technology intensive industry and exports. Labour intensive industries still remain important for exports in Poland and the Baltic states. A similar picture emerges with regard to skill intensity (Landesmann and Stehrer, 2003). ...read more.

More detailed analysis (Halpern, 1995; Landesmann and Sterher, 2003) contradicts this conclusion. Participation rates especially in tertiary education are low, as are indicators such as scientists and engineers in the population, R&D share of GNP and the proportion of R&D personnel in manufacturing thus CEE is not very well equipped to compete in the more advanced areas of industry. In the near future the comparative advantage of CEE seems likely to be in labour intensive production. The analyses based on revealed comparative advantage do not, however, suggest that such specialisation will have significant impacts on employment and production. A rather crude distribution of benefits of enlargement among countries suggests that Germany is the major gainer, Ireland and Greece gain proportionately little. Portugal is a marginal net loser because of competition for its textile industry. Table 6 Distribution of gains among EU incumbents (change from base case, less conservative scenario) 1992 ECUbn % of EU15 total Share of EU15 GDP 1992 Volume of GDP % Baldwin et al Lejour et al Germany 3.8 33.8 33.8 0.1 France 2.2 19.3 19.3 0.1 UK 1.6 14.1 14.1 0.0 Italy 1.0 8.5 8.5 Spain 0.8 7.0 7.0 Netherlands 0.5 4.6 4.6 0.1 Sweden 0.4 3.9 3.9 Belgium/Lux 0.3 2.6 2.6 Austria 0.3 2.6 2.6 Denmark 0.2 1.9 1.9 Finland 0.2 1.4 1.4 Ireland 0.0 0.3 0.3 Greece 0.0 0.3 0.3 Portugal -0.0 -0.4 -0.4 South Europe 0.1 EU 15 11.2 100.0 1.2 0.1 Source: Baldwin et al (1997) p.149; Lejour et al 2001, p.25 The likely production and employment impacts of CEE integration with the EU are likely to be small and spread over a comparatively long period. This together with the intra-industry nature of most trade should ease the adjustment to new the pattern of production. There is no evidence that particular EU countries or regions are likely to be very adversely affected. This indicates that the adjustment problems of CEE enlargement are not likely to be great and all studies agree that the integration of these economies to the EU will overall have a positive impact. ...read more.