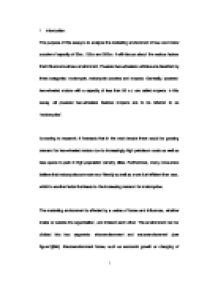 The purpose of this essay is to analyze the marketing environment of low-cost motor scooter of capacity of 50cc, 125cc and 200cc. It will discuss about the various factors that influence business environment.

1. Introduction: The purpose of this essay is to analyze the marketing environment of low-cost motor scooter of capacity of 50cc, 125cc and 200cc. It will discuss about the various factors that influence business environment. Powered two-wheelers vehicles are classified by three categories: motorcycle, motorcycle scooters and mopeds. Generally, powered two-wheeled motors with a capacity of less than 50 c.c. are called mopeds. In this essay, all powered two-wheelers besides mopeds are to be referred to as 'motorcycles'. According to research, it forecasts that in the next decade there would be growing demand for two-wheeled motors due to increasingly high petroleum costs as well as less space to park in high-population density cities. Furthermore, many consumers believe that motorcycles are more eco-friendly as well as more fuel-efficient than cars, which is another factor that leads to the increasing demand for motorcycles. The marketing environment is affected by a series of forces and influences, whether inside or outside the organization, and interact each other. The environment can be divided into two segments: microenvironment and macroenvironment (see figure1)(ibid). Macroenvironment forces, such as economic growth or changing of population, may not seem to be important, but could potentially have quick, direct influences on a firm's micro-environment. In this essay, microenvironment and macroenvironment analysis will be used to analyze the global marketing environment. ...read more.

It can be seen that Asia-Pacific dominates almost half of the market. Figure 3: Global motorcycles market segmentation II: % share, by volume, 2009 Source: Datamonitor, 2010 According to the Euromonitor International (2011b), it is apparent that the top six countries in terms of motorcycle ownership are Asian countries. Until 2010 Taiwan has ranked No. one among the world, in which 83 per cent of the total population possess motorcycles, followed by Vietnam, Thailand, who respectively have 74.1 per cent and 71.2 percent of their population owning bicycles. In addition, the possession of motorcycles reveals the upward trends among these countries with regards to motorcycle ownership from 2005 to 2010 (see table 1)(ibid). Table 1: Possession of Motorcycle Source: Euromonitor International 2011 2.2.3 Suppliers: The supplier is a foundational element for any business; however, without the key supplier or raw materials, finished products may result in being made by raw materials of lower quality or expensive substitutions. Key raw material suppliers for the motorcycle industry are steel sheets and aluminum, casting and steel sheets and also some finished components such as seats, batteries, and tires (Datamonitor, 2010). The above mentioned raw materials are similar to automobile raw materials in that they can be classified into two big categories: Tires & rubber and auto parts & equipments. ...read more.