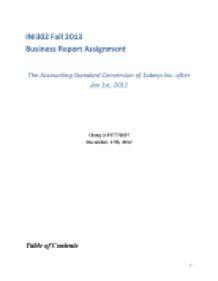 The purpose of this report is to give our client-Sobeys Inc.s board of directors and stakeholders a more in-depth understanding of the firms accounting standard conversion from Canadian GAAP to IFRS

﻿INI302 Fall 2013 Business Report Assignment The Accounting Standard Conversion of Sobeys Inc. after Jan 1st, 2011 Chang Li 997776697 November. 17th, 2012 Table of Contents Executive Summary Page 3 Introduction Page 3 The major differences between GAAP and IFRS Page 4 The necessity of Sobeys? conversion from Canadian GAAP to IFRS Page 5 The cost of the conversion for Sobeys Page 7 The advantages and disadvantages of the conversion to IFRS Page 8 Conclusion and Summary Page 8 List of Reference Page 10 Executive Summary The purpose of this report is to give our client-Sobeys Inc.?s board of directors and stakeholders a more in-depth understanding of the firms? accounting standard conversion from Canadian GAAP to IFRS. This report intends to help the users by answering the four questions they may concern regarding this conversion. The report is divided into five sections in the same order of these four questions: 1. The major differences between GAAP and IFRS: The report analyzes the major differences uses the resources from Big 4 public accounting firms and accounting literature. 2. The necessity of Sobeys? conversion from Canadian GAAP to IFRS: The report uses both PwC and Deloitte?s approaches to determine the necessity of Sobeys? adoption of IFRS. Using two credible resources will increase the reliability of the report. 3. The cost of the conversion for Sobeys: The report analyzes and summarizes the relevant cost incurred to Sobeys Inc. because of the conversion. The cost information is obtained from Sobeys? parent company- Empire Company Limited?s official audited 2010 annual report. 4. The advantages and the disadvantages of the conversion to IFRS for Sobeys: By analyzing both positive and negative sides of the conversion, the report will give readers a more objective view of the issue. 5. Conclusions and Summary: The report concludes the topic by taking into account all the determining factors discussed in the report. The adoption of IFRS is an unavoidable decision made by Sobeys from the firm?s perspective because of both internal and external factors. ...read more.

Undue cost should not be incurred due to the transition. As a big private firm and being supported by its parent company, Sobeys has both the capability and resources to make the transition. 4. Other specific considerations: Management of the private firms may have specific consideration regarding the technical accounting changes that IFRS will bring to the firm which will be beneficial to them as determined by the firm. For example, the management might prefer the new revenue recognition rules in IFRS for specific reasons. Sometimes specific considerations will override other factors when the management is making the conversion decision. Analysis uses PriceWaterhouseCoopers (PwC)?s approach: In the report ?GAAP or IFRS- an important choice to be made by private firms?(PriceWaterhouseCoopers, 2009), PwC introduced a summary of factors to be considered when private firms are making the IFRS conversion decision. The factors in the report that are relevant to Sobeys? situation are as following: A Canadian private company should consider IFRS as its best alternative when: a) There is possibility that the firm will go public in the future. Sobeys? operation is nation-wide and has been successfully operated by its management team since it was founded. Going public will help Sobeys? growth in many aspects such as attracting investment and financing. b) The firm is a subsidiary of a Canadian public firm that will be converted to IFRS. Sobeys? is a fully owned subsidiary of Empire Company Limited. To be consistent with the parent company?s accounting standards, it is better for Sobeys to convert to IFRS. The complexity can be reduced when it comes to preparing the financial reporting for the whole business entity. c) The firm has competitors using IFRS. The biggest competitor of Sobeys, Loblaw, is a public company that will adopt IFRS practices after 2011. Converting to IFRS will increase the comparability and understandability of Sobeys? financial reports. These two qualitative factors are essential when the users need to assess the overall quality of the financial reporting. ...read more.

I chose Sobeys Inc. as my audience company because it is a typical company that was faced with the conversion decision back in 2010 and 2011. I think Sobeys Inc. can be a benchmark firm for many other smaller private firms. Another reason why I chose it is because that Sobeys? financial and organizational information are publicly available online. This business report requires vast amount of research. The biggest problem I conquered was the choosing of an appropriate company with a lot of information available online. Both primary and secondary information analysis needs to be conducted. Private firms are not required to disclose their information to public thus it may cause difficulties for my analysis when it comes to information searching. It took me a while to look for the proper company for this topic. I tailored my original topic a little bit to match Sobeys? particular situation. I arranged the body part of my report in a very clear layout. First, I talked about the differences of GAAP and IFRS to give my non-accounting background readers some idea about the changes in the policies. After that I talked about reasons behind Sobeys? conversion decision. I obtained supporting information from credible sources and also analyzed this question using different approaches to make it more reliable. Thirdly, I summarized the cost incurred to Sobeys since it might be readers? biggest concern. The last analysis I did is the cost and benefit analysis. At the end of the report, a conclusion section summarized the whole idea of the report. The objective of this business report is to give readers a clear but brief analysis and understanding of Sobeys? conversion to IFRS, from causes to effects. However, there are still problems reaming in my writing skills. Next time, I will pay attention to the transition between my paragraphs and sentences. In addition, adding more graphs and tables will also help making my report more appealing to users. ...read more.