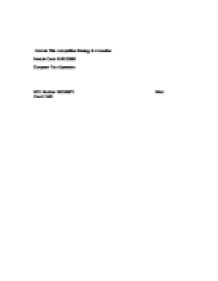 When assessing the barriers to entry, legislation and governmental forces play an important role in the barriers to firms, to an extent that many economists believe the only affective barriers of entry are those set by the government(Grant 2005). Legislations imposed by the EU, such as the 2013 emissions trading scheme, may therefore affect the level of profitability and increase the competitive rivalry. TUI’s CEO is concerned that incentivising the efficient use of aircrafts and the cap on fuel consumption may lower  the  competitive advantage, as larger firms with higher fuel consumption are forced to increase consumer’s tax (TUI website).

The rise in no thrill airlines and the ease of setting up online agencies that are able to offer cheaper holiday packages have also placed pressure on operators such as TUI group and MyTravel which merged with Thomas Cook. These European tour operators are under major pressure to differentiate their product and the distribution channel to offer higher value through exclusivity in comparison to competitors. “By their nature, differentiated products are unique in the marketplace and difficult to replicate by competitors In the Mainstream Sector”(TUI Website 2012).

Although online travel agencies have gained popularity through the recessionary years, due to consumers becoming more price sensitive, operators such as TUI have maintained growth within the market by offering differentiated packages, such as the Thomson couples concept which includes child free hotels (TUI website 2012). Travel operators are therefore required to make the most efficient use of their resources by focusing on their core competencies to gain competitive advantage.

Threat of entry is also reduced by the high capital requirements of setting up in this industry. As demonstrated in (appendix 2), 50 % of the market belongs to the top four players within the industry which significantly cut price retaliation, resulting in a greater economies of scale. Furthermore, intangible capital such as the brand name and patents act as a barrier by reducing the threat of new entrants. “The resource based approach has had a profound impact on company strategy formulation”. (Grant 2005)

The increased internet access and higher number of search engines and price comparison websites has made vast amounts of up-to-date information readily available to customers of this industry. This has increased the relative power of buyers and has encouraged price wars between competitors. Whilst lower cost airlines such as Easy Jet have been able to maintain a significant proportion of the market share (appendix 3), the European tour operators have not only been substituted for cheaper air travel, but also cheaper hotels.“ A company can maintain its leadership in the market only by establishing a difference that it can preserve (Porter, 2006).

The backward integration of tour operators such as TUI with 279 hotels (referring to case study) has assisted them in sustaining superior value in comparison to competitors. By owning their own Airlines and Hotels, tour operators are in a great position to achieve cost leadership. Within the recent down turn, falling profitability through unoccupied rooms also caused operators to lower prices drastically in order to compete with suppliers such as individual hotel owners and chains.

Factors such as the economical downturn combined with and increased consumer awareness have therefore brought about the  need for companies to differentiate their products and services, and the travel industry is no exception. In addition to the above examples, rising airport tax and lower exchange rates have brought about drastic shifts in the demands for overseas holidays. Airlines such as Ryanair and Easyjet have used these conditions to their advantage by offering “no-frills” passenger flights. “The carriers continue to expand, and both have more aircraft on the way” reports Travel Weekly (Travelweekly 2008).

Although the lodging is a major industry within Europe, with over 200,000 rooms(referring to case study), the rather fragmented nature of the industry within Europe means that tour operators face fierce competition from not only chains but a large number of private hotel owners, which are now able to access the internet to promote room bookings. “About half of French and U.K. travelers make their hotel bookings directly from the supplier” (OTLA 2011)  .

the  barriers to exit are higher in vertically integrated firms which have a high level of assets tied down in hotels, aviation, agencies and contracts such as Labour agreements, which hinder operators from exiting the industry without facing significant loss. Daily Mail (2010), reports the British tour operator Goldtrail, was bankrupt after years of consecutive loss. This exemplifies the high barriers to exit within the tourism industry.

Many customers cut costs through taking alternative sources of transport such as driving or taking a train. “As for rail travel, Government investment in new high speed lines will eventually bring lower prices, improving services and increasing speed”(Visit Europe 2006).Despite package holidays offering financial security, customers are able to bargain for cheaper flights and hotels on DIY holidays. Companies such as Rewetouristik which specialise in providing package holidays, face the threat of substitution from customers switching to domestic holidays or bargaining cheaper holiday packages from companies such as Expedia and Travelocity. OTLA (2011) reports that more than a third of  leisure holidays booked in France are to destinations within the country. While young holiday makers may choose to go camping instead of staying in a hotel, families may decide to stay at lower cost accommodations such as a beach house to save costs. Customers may also choose to travel long distances using more than one source of transport (Porter 2009).

In the same way, that suppliers of commodities such as raw materials hold relatively low bargaining power with manufacturers, the suppliers of hotel rooms also have a relatively low bargaining power against major tour operators, due to the wider range of substitutes and the increasing threat of backward integration by firms. Major tour operators such as TUI merging with first choice, have gained competitive advantage through cutting out a large number of suppliers. Although, foreign hotels are able to exercise a higher bargaining power in comparison to UK hotels which tend to be on a public sector contract, the threat of backward integration by large firms such as Thomas Cook plc reduces their bargaining power. Foreign hotel operators are therefore forced to accept a lower price or risk losing a large proportion of revenue through a lower occupancy of their rooms. “Now Thomas Cook - one of the duopoly of mass tour operators in the UK - has decided to flex its muscles and demonstrate its bargaining power with a key supplier group holiday hotels.” (Riley 2010).

The suppliers within the airline aspect of the  industry however hold a relatively high bargaining power. Porter (2009) states that suppliers of aircrafts and aircraft engines are able to bargain high prices due a low availability of supplier substitutes. Such factors significantly reduce the return on capital employed.

As the concentration of competitors are relatively high due to the attractiveness of the tourism industry, the bargaining power of buyer tend to be high (Porter, 2009).  Even though luxury and exclusive holidays such as TUI’s hapag-Loyd-Express cruise liner have relatively low price sensitivity, the growth in no thrill airlines, the global Economy, Personal Budgets and the internet and social media have increased the price sensitivity for the average holiday.

While business and work related flights may still depend on time flexibility, price is likely to be the main motivator for young holiday makers which tend to have a lower budget. When it comes to choosing a holiday, websites such as TripAdvisor enable customers to read reviews on factors such as the hotel service quality, location and the overall experience which can play an influential role in determining the final decision. For example a Thomas Cook customer may change or cancel their holiday based on reading poor reviews on the hotel they are staying in.

The switching cost for customers tends to be low within the tourism industry as customers are able to gather information on cheaper holidays which provide equal performance, as differentiation is still low within normal holidays as opposed to luxury holidays.

If tour operators are to compete while working for mutual benefit, they must strongly consider the firms which will complement the firm positively and therefore must understand the need that they are able to serve by coopeting. For example Allegis Corporation's which attempted to serve the needs of customers by joining United Airlines, Hertz car rental, and hotels was unsuccessful as the company no longer had a clear understanding of their strategy(Grant 2005)

Although substitution tends to be low within the airline industry, the economic recession has shifted the demand for sources of transportation. Appendix 2 demonstrates the shift in demand for both airline travel and rail before and after high speed trains were introduced in a particular area of Spain. Although TUI has been able to add value by differentiating its products through a range of luxury and low priced airlines, TUI may decide to penetrate the market for long-haul sources of transport.

Traditionally, potential entrants needed a large capital to enter the tourism industry. However, internet and the increased trend towards consumers purchasing holidays online, combined with the low entry costs and ease of setting up in e-commerce changes the whole context. This results in lower barriers to entry for startups, and an increase in new competitors.

This increase in online businesses (OTLA) also has a direct affect on the intensity of rivalry. Awareness of this aspect of the market, can help TUI to understand the need for investing in brands that can become OTLA market leaders. TUI already owns a share of this market through brands such as Laterooms.com (Laterooms 2012). The alignment of TUI’s strategic goals with such trends is reiterated in their statement that effective use of online sales channels is central to their strategy regarding distribution of their products.

In terms of the suppliers bargaining power, the fluctuation in fuel prices will continue to impact the global market. In contrast TUI is able to place a cap on the price paid within a period of time through hedging.” A risk management strategy used in limiting or offsetting probability of loss from fluctuations in the prices of commodities, currencies, or securities” (Businessdictionary, 2012). They should however understand that this could be a risk, as it may sometime prove to be a loss. Therefore, an area of concern for TUI will be the competitors, which seek to change their position in the supply chains. For example those  competitors that are market leader in distancing themselves from the use of fossil fuels and moving towards more environmentally friendly alternatives.

Globalization and the growth in technology are likely to increase the need of identifying the unique selling point through product differentiation. As smaller companies continue to compete for the same market share as TUI, the bargaining power of customers are likely to increase. Therefore, tour operators are likely to penetrate new market segments through innovative distribution channels and methods in order to add value by delivering the needs of individual customers in an attempt to lower customer’s negotiation power.