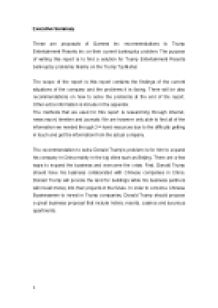 The purpose of writing this report is to find a solution for Trump Entertainment Resorts bankruptcy problems. Mainly on the Trump Taj Mahal.

﻿Executive Summary These are proposals of Gamms Inc recommendations to Trump Entertainment Resorts Inc on their current bankruptcy problem. The purpose of writing this report is to find a solution for Trump Entertainment Resorts bankruptcy problems. Mainly on the Trump Taj Mahal. The scope of the report is this report contains the findings of the current situations of the company and the problems it is facing. There will be also recommendations on how to solve the problems at the end of the report. Other extra information is include in the appendix. The methods that we used for this report is researching through Internet, news report, timeline and journals. We are however only able to find all of the information we needed through 2nd hand resources due to the difficulty getting in touch and get the information from the actual company. The recommendation to solve Donald Trump?s problem is for him to expand his company in China mainly in the big cities such as Beijing. There are a few ways to expand the business and overcome the crisis. First, Donald Trump should have his business collaborated with Chinese companies in China. Donald Trump will provide the land for buildings while his business partners will invest money into their projects in the future. In order to convince Chinese Businessmen to invest in Trump companies, Donald Trump should propose a great business proposal that include hotels, resorts, casinos and luxurious apartments. i 1. Introduction 1.1 Authorization This business report is commissioned by Gamms Inc. The purpose of this report is proposing solutions to Trump Entertainments Resort Inc concerning the bankruptcy problem currently. 1.2 Limitation We are able only to get all of the information we needed through 2nd hand resources due to difficulty getting in touch and get the information with the actual company. ...read more.

Excessive regulations tend to hinder entrepreneurial and commercial activities, as managers and employees must spend more time and money to comply with rules and regulations. If an investor wants to set up a manufacturing facility in China, high start-up costs, legal exposure and other cumbersome compliance items may encourage that investor to set up the facility elsewhere, where the business climate is more conducive to industry. Other types of regulations include mandatory joint venture partnerships in which, together with the foreign investor, the business is required to have a Chinese government agency or local company as a partner. A judicial system that is biased toward protecting Chinese locals - who conduct what are sometimes perceived as unfair, illegal, or unethical business practices - can also contribute to making China a less favorable investment destination. Another regulatory determinant involves the government's promotion of investment activities by providing attractive financial incentives in the form of tax breaks, grants, low-cost government loans and subsidies. Government-sponsored financial inducements provide the possibility of making a business more profitable and in a shorter amount of time. 1. Stability Political and economic stability can facilitate an influx of FDI. Stability represents predictability and the opportunity for enterprises to gain better foresight into the future. Alternatively, constant social unrest, rioting, rebellions and social turmoil are settings not conducive to business. Economic instability can also contribute to hyperinflation, which can render the currency virtually obsolete. To encourage FDI, citizens/workers as well as businesses should have a reasonable basis for respecting Chinese law and order. Violence, criminal activity, blackmail, kidnappings, and counterfeit currency and products have all been problems in China that serve to undermine the efficacy of conducting trade activities. ...read more.

Beijing is one of the most popular tourism spots in China because it?s the capital city of China and Beijing's Capital International Airport is the second busiest airport in the world. In 2011, Beijing plans to double its annual tally of international visitors to 10 million within five years to catapult itself into position as one of the world's top tourist destinations. The Trump casino should also be opened in China because gambling is quite popular among the Chinese and the population in China is the highest in the world. Therefore, the casino will have a higher chance of getting customers than other countries such as Thailand or Japan. Most Asian celebrities are also located in China. So, instead of flying all the way to the United States for some gambling, they can save time and money by just gambling in an international casino in their own country. Luxurious apartments should also be built in China to accommodate more people in the country because the country is overpopulated. Many millionaires and billionaires in China would be able to afford the luxurious apartments and would be willing to buy it to increase their social status. It would be a big hit because it would be the first time that the Trump Company owns a building in Asia. Feb. 17, 2009: Four days after Trump's resignation, Trump Entertainment files for Chapter 11 bankruptcy. Like other Atlantic City gaming halls, the financially troubled Trump casinos are battered by the recession and fierce competition from Pennsylvania's slot parlors. Aug. 3, 2009: Trump Entertainment chooses Donald Trump's buyout offer over a competing plan floated by corporate bondholders. The buyout is subject to approval by the bankruptcy court and creditors. ...read more.