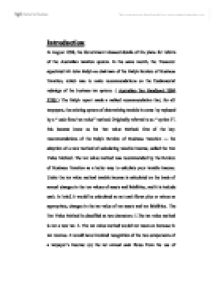 The Ralph Review of Business Taxation, which was to make recommendations on the fundamental redesign of the business tax system. ( Australian Tax Handbook 2004 P790 ) The Ralph report made a radical recommendation

Introduction: In August 1998, the Government released details of tits plans for reform of the Australian taxation system. In the same month, the Treasurer appointed Mr John Ralph as chairman of the Ralph Review of Business Taxation, which was to make recommendations on the fundamental redesign of the business tax system. ( Australian Tax Handbook 2004 P790 ) The Ralph report made a radical recommendation that, for all taxpayers, the existing system of determining taxable in come by replaced by a " cash flow/ tax value" method. Originally referred to as " option 2", this became know as the Tax value Method. One of the key recommendations of the Ralph Review of Business Taxation --- the adoption of a new method of calculating taxable income, called the Tax Value Method. The tax value method was recommended by the Review of Business Taxation as a better way to calculate your taxable income. Under the tax value method taxable income is calculated on the basis of annual changes in the tax values of assets and liabilities, and it is include cash. In brief, it would be calculated as net cash flows plus or minus as appropriate, changes in the tax value of tax assets and tax liabilities. The Tax Value Method is classified as two characters: 1.The tax value method is not a new tax. 2. The tax value method would not mean an increase in tax revenue. It would have involved recognition of the two components of a taxpayer's income: (a) ...read more.

Te business tax system should be designed in as simple a manner as possible recognizing economic substance in preference to legal form. 2. Where the tax treatment of particular transactions is likely to be complex, such additional complexity in the tax law should be justified by the improvement in the equity or economic growth that may be achieved. (Australian Taxation Law 2005 P29) In the Tax Value part, it could simplify the income tax system because the tax value method is based on as few, and as simple, concepts and mechanisms as possible. The current law income tax has many different ways of assessing gains and recognizing losses for tax purposes. The tax value method would have one standard way. The tax value method can reduce the consistencies between different tax systems (e.g by using the same concepts and definitions in GST and income tax) to help reduce complexity. In another side the Tax Value Method would help to reduce the size of the income tax law. The reduction in the size of the law would come in two ways: 1. the tax value method's core rules and standardized concepts would automatically deal with what is now covered by many disparate rules scattered throughout the current law. 2. The Income Tax Assessment Act 1936 has to be rewritten any way, to complete the work of the Tax Law Improvement Project, whether or not the tax value method proceeds---this project halved the size of those provisions which were rewritten. ...read more.

costs; #they are often capricious in their incidence, and regressive in their impact; #they tend to be resented more by the taxpaying population than administrative costs. In the Tax Value Method part, it can improve compliance because there would be fewer ways to avoid tax. The first reason is that the tax value method deals with all transactions in one standard way and treats different taxpayer with the same economic circumstances in the same way. The second reason is that there would be a smaller variety of different regimes, so there would be less incentive to re-characterize a transaction to move it to a more favorable regime. The last reason is that there would not be any timing anomalies to allow one party to a transaction deduction for a loss before other party was assessed. Conclusion: In conclusion, this essay has discussed the some issues and arguments about the 'cashflow/ tax value' approach. In my point of view, the Tax Value Method will be operated in the future. The four main reasons as above are "simplify", "certainty", "equitable" and "compliance costs". In the other hand, the Board of taxation has developed prototype legislation and other supporting material to evaluate and test the tax value method. The review of Business Taxation stated that the tax value method has a number of benefits. The tax value method can be an effective and good way to solve the current Taxation problems. Reference: Australian Tax Handbook 2004 P790 Australian master tax guide 2004 P327 Australian Taxation Law 2005 P27 P28 P32 www.ato.gov.au www.findlaw.com ...read more.