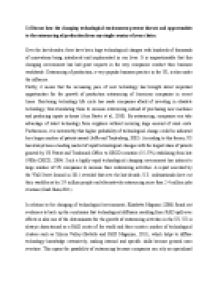 ﻿1) Discuss how the changing technological environment present threats and opportunities to the outsourcing of production from any single country of your choice. Over the last decades, there have been huge technological changes with hundreds of thousands of innovations being introduced and implemented in our lives. It is unquestionable that this changing environment has had great impacts in the way companies conduct their business worldwide. Outsourcing of production, a very popular business practice in the US, is also under the influence. Firstly, it seems that the increasing pace of new technology has brought about important opportunities for the growth of production outsourcing of American companies in recent times. Shortening technology life cycle has made companies afraid of investing in obsolete technology, thus stimulating those to increase outsourcing instead of purchasing new machines and producing inputs in-house (Ann Barter et al, 2010). By outsourcing, companies can take advantage of latest technology from suppliers without incurring large amount of sunk costs. Furthermore, it is noteworthy that higher probability of technological change could be indicated by a larger number of patents issued (Jaffe and Trajtenberg, 2002). According to this theory, US has always been a leading market of rapid technological changes with the largest share of patents granted by US Patent and Trademark Office to OECD countries (55-57%) stabilizing from late 1980s (OECD, 2004). Such a highly rapid technological changing environment has induced a large number of US companies to increase their outsourcing activities. A report executed by the Wall Street Journal in 2011 revealed that over the last decade, U.S. multinationals have cut their workforces by 2.9 million people and alternatively outsourcing more than 2.4 million jobs overseas (Zaid Jilani,2011). ...read more.

The outsourcing process of Sony?s TV division experienced a progressively growing path during the crisis. In 2009, Sony only outsourced its small and mid-sized TV sets, and still made ultra-thin high-end TV totally in house to avoid its cutting-edge innovation being leaked to competitors. In 2010, Sony increased its outsourcing volume of LCD panels installed on the BRAVIA TV range from 30% up to 50% to Taiwanese manufacturers (Vincent Teoh, 2010). In 2011, a Taiwanese daily newspaper reported that even the Sony Bravia?s design was handed to another manufacturer in Taiwan. This step means that eventually customers will buy a TV with Sony brand name, but actually it is assembled and designed by another company. Hence it is obvious to see that outsourcing activities in Sony have been developed both broadly (growing volume from 30% to 50%) and deeply (from outsourcing separate components to TV design) under the influence of economic crisis with the ultimate goal of reducing costs and enhancing competitiveness. Outsourcing TV design in Sony also indicated a new trend in the outsourcing practices is that outsourcing is now all-encompassing and not only focused on one simple activity or function. Some researchers have named this as KPO (Knowledge Process Outsourcing) -a new practice of delegating high-added value tasks such as products design or R&D to outside vendors. However, firms like Sony should be very careful in choosing the right KPO suppliers as a reckless decision may end up a disastrous consequence of losing confidential business information as well as ruining its reputation in case of bad offered quality. Furthermore, in 2011, switching from being controlled generally by logistics department, the TV business of Sony was divided into 3 divisions: the LCD TV, Outsourcing, and Next Generation TV (Reuters Report, 2011). ...read more.

to be more efficient. Among different sectors, the BFSI (banking, financial services and insurance) is likely to lead BPO transaction activity as there exists a huge potential with a number of services such as transaction processing, customer service, credit card fraud management?In fact, the financial services industry, comprised of banking, capital markets and insurance, has been the leading adopter of outsourcing services with 40%- 45% of worldwide global sourcing (Avalon Global Research, 2009). The past five to six years has also seen outsourcing activities shifting from single supplier to multiple ones (Norton Rose Group, 2011). In other words, financial crisis has made multi-sourcing a new trend which provides great flexibility and helps to reduce risk of too much dependency on one vendor. With reference to the Euzo Zone, flexibility and risk management are definitely valuable in the time of financial uncertainty, when there is increasing concern about financial viability and performance capability of partners. According to IT Outsourcing Intelligence Report 2011, a large number of enterprises surveyed based in the EuroZone such as Finland, Austria, Germany, Cyprus or Malta prefer multi-sourcing over single-sourcing (10%-70% higher).Nevertheless, companies should be clearly aware that managing multiple vendors is more complicated and time-consuming, thus it is important for managers to understand outsourcing targets thoroughly as well as evaluate critically to choose the right partners for their projects (D Satish and Shishir Kumar, 2005). In brief, the financial crisis has affected the outsourcing practices of many companies based in Euro Zone and is asserting its impacts on the future development of global outsourcing. Adoption of outsourcing is believed to increase, with the emerging trends of near-shoring, the development of BPO and the use of multiple-vendors system. ...read more.