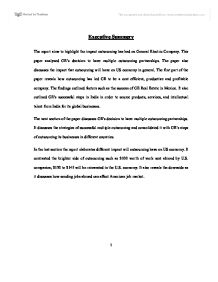 The report aims to highlight the impact outsourcing has had on General Electric Company. This paper analyzed GEs decision to have multiple outsourcing partnerships.

Executive Summery The report aims to highlight the impact outsourcing has had on General Electric Company. This paper analyzed GE's decision to have multiple outsourcing partnerships. The paper also discusses the impact that outsourcing will have on US economy in general. The first part of the paper reveals how outsourcing has led GE to be a cost efficient, productive and profitable company. The findings outlined factors such as the success of GE Real Estate in Mexico. It also outlined GE's successful steps in India in order to source products, services, and intellectual talent from India for its global businesses. The next section of the paper discusses GE's decision to have multiple outsourcing partnerships. It discusses the strategies of successful multiple outsourcing and consolidated it with GE's steps of outsourcing its businesses in different countries. In the last section the report elaborates different impact will outsourcing have on US economy. It contrasted the brighter side of outsourcing such as $100 worth of work sent abroad by U.S. companies; $130 to $145 will be reinvested in the U.S. economy. It also reveals the downside as it discusses how sending jobs abroad can affect American job market. 1.0 Introduction 1.1 Background General Electric is a diversified technology, media and financial services company focused on solving some of the world's toughest problems. With products and services ranging from aircraft engines, power generation, water processing and security technology to medical imaging, business and consumer financing, media content and industrial products, the company serve customers in more than 100 countries and employ more than 327,000 people worldwide (General Electric Company, 2008). GE is made up of four businesses, each of which includes a number of units aligned for growth. Its four global research centers attract the world's best technical minds. With more than 3,000 researchers working toward the next breakthrough, GE is positioned to continually innovate, invent and reinvent (General Electric Company, 2008). ...read more.

Another impact that outsourcing has that US-based multinationals are worried more about their bottom line than their social responsibilities and consider outsourcing to be unavoidable. GE, for instance, continues to stress the importance of low-cost centers in its global strategy and growth. GE also feels that globalization could lead to a loss of jobs in low-tech industries but that it will create jobs in high-tech ones too. According to the company, by centralizing its operations and leveraging low-cost operating centers in the US states of Virginia and North Carolina as well as in India and Ireland, GE has also developed sophisticated technological tools that enhance performance by automating key processes and reducing response times and process variations (Basu,2004). 2.3 Multiple outsourcing partnerships Outsourcing refers to the concept of looking for expertise to handle certain business functions outside the existing firm. The decision-making process that management must undergo when considering outsourcing, hinges on a "make or buy" philosophy. More variables are brought into play when management considers outsourcing a product or service that is currently being produced internally. Many more options exist currently than there were even a decade ago. In today's business environment it is now possible to outsource virtually any aspect of the business (Embleton & Wright, 1998). One of the major challenges of outsourcing is moral hazard, as evidenced where businesses do not guard themselves prior to contract against their dependency on that supplier, and where, separately, they fail to appreciate the power which transfers to the outsource supplier in respect of their own business activities. One of the accepted ways to mitigate this is multiple outsourcing. This manifests itself normally in breaking down the outsourcing activities by separate function. By choosing to work with multiple outsource suppliers, enterprises can cut costs and foster competition between vendors, while taking advantage of vendor specialization and technical expertise (McDowall, 2005). The keys to successful outsourcing fall into three categories: * Strategic analysis; * Selecting the providers; and * Managing the relationship (Embleton & Wright, 1998). ...read more.

Research shows that some of the new economic activity generated in developing countries by outsourcing will generate new demand for goods and services in the country where the jobs have moved from (e.g. America). McKinsey Global Institute estimates that for every dollar US corporations spend on outsourcing to India, 33c gets 33c and the US economy benefits by $1.14. This is based on several assumptions: that 69% of displaced service workers will find new jobs within a year, and will end up earning 96% of their previous wages backed up by 1979-1999 data. However older workers may be out of work far longe, especially if their education is poor. Outsourcing saves money for corporations which mean lower costs for consumers and higher dividends for pensioners who own 75% of US and UK wealth which means more money to spend on other things such as local services and that produces new jobs (Global Change Ltd, 2008). 3.0 Conclusion Outsourcing otherwise known as subcontracting is the strategic use of resources outside the company to perform tasks that are usually handled internally by the company itself. In today's competitive world, successful outsourcing is a powerful tool for companies to generate value and gain competitive edge over rivals. The paper contrasted the impact of outsourcing has had on General Electric Company. The report critically evaluated the outsourcing steps made by GE which led their business to be cost efficient, productive and profitable. The paper also analyzes GE's decision to have multiple outsourcing partnerships. It demonstrated GE's successful multiple outsourcing strategy through strategic analysis, selection of providers and managing relationships. The report concluded by analyzing the impact outsourcing will have on US economy in general. It explained how outsourcing can affect the American job market also how it can input benefit in US economy. It revealed facts such as, every $100 worth of work sent abroad by U.S. companies, $130 to $145 will be reinvested in the U.S. economy. ...read more.